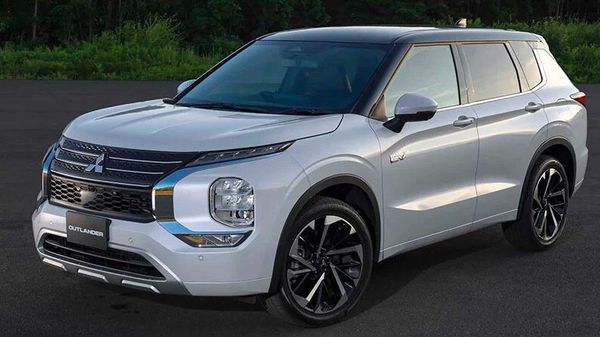 Mitsubishi has revealed the new 2021 Outlander PHEV just within months of the new-gen Outlander. The world stage premiere of the new electrified Mitsubishi Outlander is bound to happen on October 28th. The overall technical details of the new model will be announced only at its world premiere.

On the outside, the new Outlander PHEV carries over the same exact design as the standard Outlander. The only minor tweaks include the hybrid badging on the front doors and tailgate. The rear of the new Outlander PHEV will sport horizontal themed taillights extending to both edges of the SUV to give it a more accentuated. The SUV will roll on 20-inch wheels with front and rear fender flares for a more pronounced appeal.

The company has announced that the vehicle will be introduced in 10 colour options and that this number includes the diamond colour series. These will have hues such as Red Diamond, White Diamond, and the new Black Diamond.

Inside, the cabin looks similar to the standard ICE Mitsubishi Outlander but with minor changes. It has received an updated digital instrument cluster which gets a dedicated section for the PHEV powertrain. The new meter has been coded to display the electric drive range and the battery’s condition for obvious reasons. Other changes include a horizontally sculpted instrument panel which has been added to give the user a better understanding of the positioning of the car while driving.

The technical details of the car remain yet to be officially announced. It may not arrive in the Indian market anytime soon.

Check out the possible look of Maruti Baleno Facelift ahead of launch, will get connected car features

Stellantis announces its plans to invest heavily on software for cars