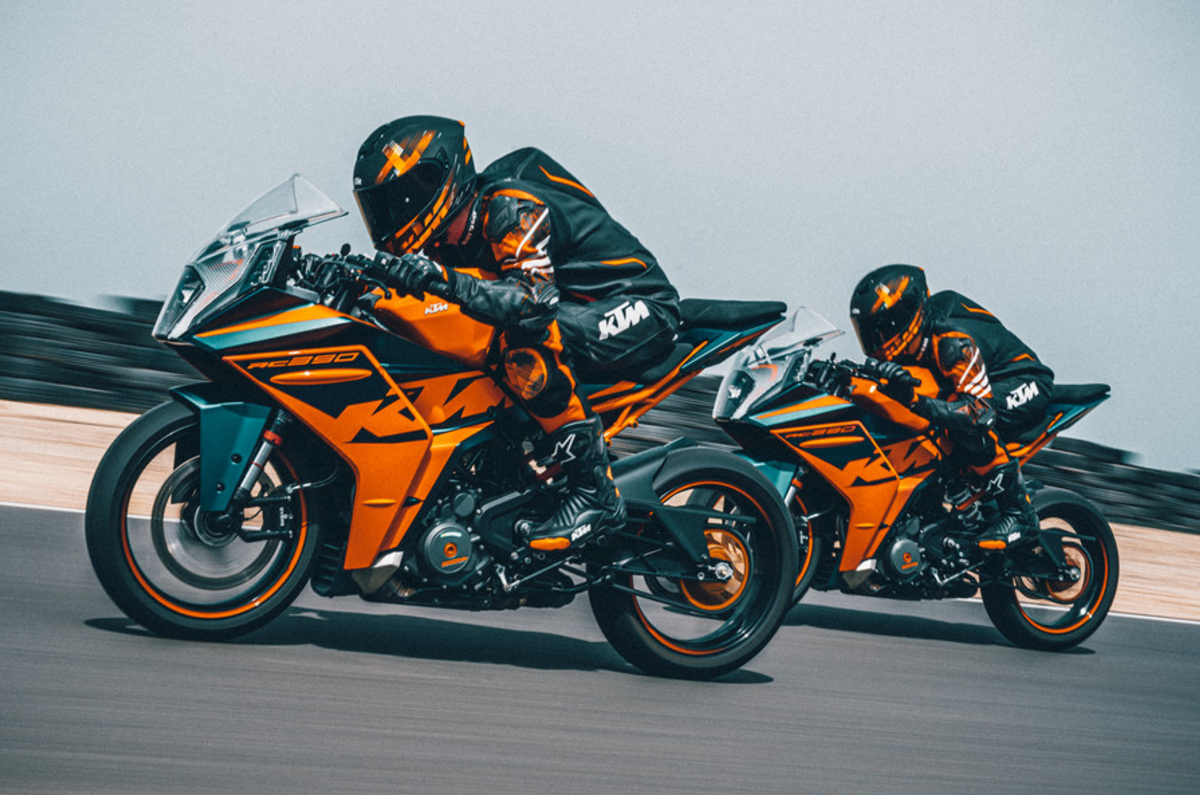 After all the anticipation, spy shots and leaks, the next generation of KTM RC sport bikes has finally been officially unveiled. The Austrian manufacturer has taken the wraps off the 2022 RC 390 and RC 125, and there are no major surprises on the design front, because images of these bikes were already leaked about a month ago.

KTM says that it has aimed for a larger look, not only to give the bikes more presence, but also to provide better wind and weather protection to the rider, as well as improved heat management for the engine. The fuel-tank is now larger, at 13.7 litres, thus addressing one of the prominent shortcomings of the outgoing model.

Earlier spy pictures revealed that these new RCs feature more relaxed ergonomics, but what’s new is that the height of the clip-on handlebars can be adjusted by 10mm. Seat height is lower by 11mm and now stands at 824mm, while ground clearance is up by 8mm to 158mm, both of which should make the bike more usable. Folding rear brake and gear shift levers are a very neat touch considering the track-oriented nature of these bikes.

The new wheels and brakes have resulted in a rather sizeable reduction of 4.4kg in unsprung mass (3.4kg from the wheels and 960gms from the brakes), which should make the new RCs feel lighter on their feet. The frame has also been redesigned and now weighs 1.5kg less than before. Overall, the 2022 RC 390 has lost a massive 15kg, now tipping the scales at 155kg dry versus the earlier 170kg.

Most of the new information comes in the realm of specs and features on these updated motorcycles. Most notably, the RC 390 gets adjustable suspension at both ends: the fork is adjustable for compression and rebound damping, while the monoshock can be tweaked for preload and rebound damping. In terms of electronics, it also gets a Supermoto ABS mode, cornering ABS and lean-sensitive traction control, thanks to the addition of an IMU, as well as an optional bi-directional quickshifter.

The RC 125 misses out on these features, but doesn’t really necessitate most of them in the first place anyway. We now also have official confirmation that the RCs get an LED headlight, a Bluetooth-enabled TFT display and a bolt-on rear subframe. The screen will feature KTM’s ‘MY RIDE’ system, allowing riders to control music playback and phone calls on the go, as already seen on the 390 Duke and 390 Adventure.

In terms of engine, the RC 390’s 43.5hp power figure has remained unchanged, but torque is now up by 2Nm to 37Nm, thanks to a redesigned airbox. Also contributing to the increased torque is the revised engine mapping. The exhaust system has changed too, and now features a stainless-steel header pipe and aluminium end-can.

Peak output figures were never an issue with this engine, but it does seem to have lost some its character and excitement over the years, as emission and noise norms have become stricter. We hope this next generation can recapture some of the original charisma.

Interestingly, KTM’s description of the lubrication system has changed from semi-dry sump to wet sump, indicating that there may also be internal changes. The outgoing model uses the gearbox cavity as its oil sump, leading to the semi-dry sump nomenclature. On the other hand, a wet sump implies that the engine oil is stored in the oil pan, at the bottom of the crankcase.

With an official unveil now out of the way, it shouldn’t be long before these bikes are officially launched in India. Expect the new RC 390 to carry a premium of around Rs 10,000 to Rs 15,000 over the current bike, thereby placing it at around the Rs 2.90 lakh mark (ex-showroom). This will make it considerably more expensive than its closest rival, the TVS Apache RR 310, whose latest iteration was launched just yesterday at Rs 2.60 lakh. Although once the RR is also kitted out with adjustable suspension, it comes up to Rs 2.72 lakh (ex-showroom), which is closer to the KTM’s price.

What remains to be seen is whether the India-spec bike will get all the bells and whistles seen on this international version.