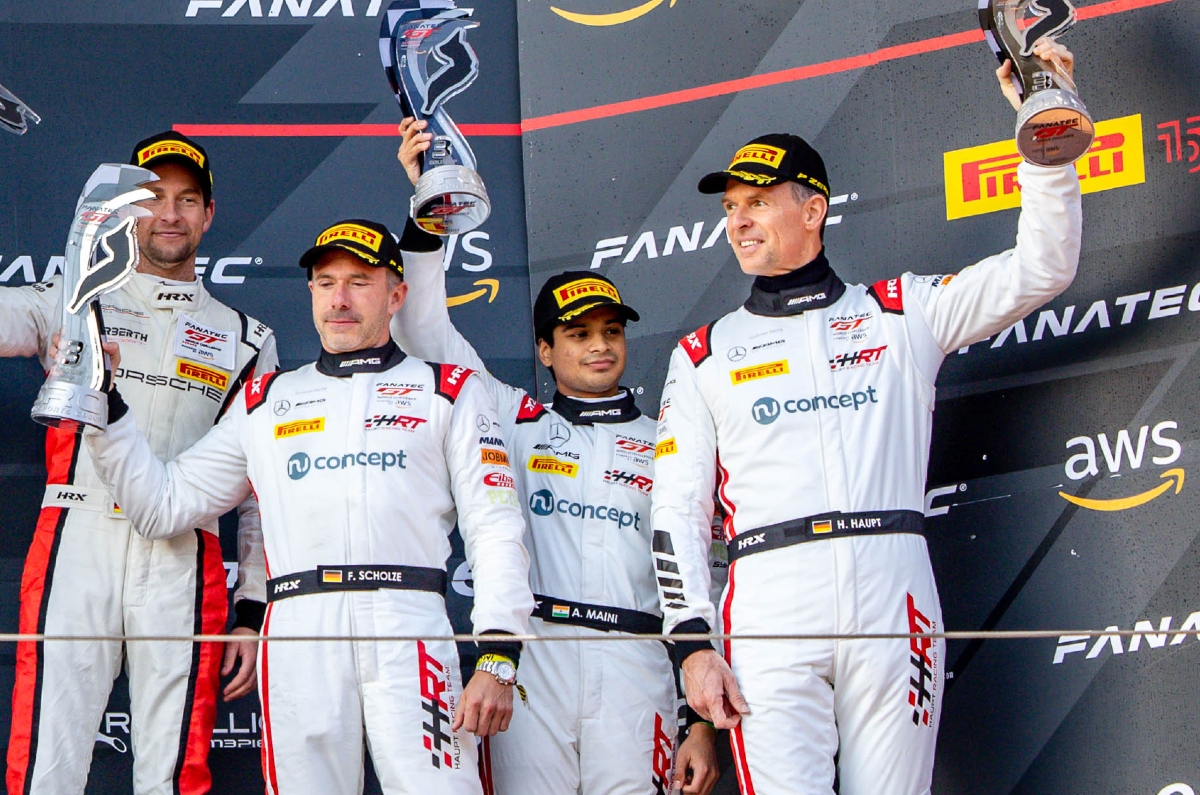 Arjun Maini had a strong start to his GT World Challenge Europe campaign, with a podium finish at the season opener at Imola. The #5 Haupt Racing Team (HRT) crew of Maini, Florian Scholze and Hubert Haupt finished third in the Gold Cup class.

Maini recently signed with HRT for his second season in the DTM. His association with the team spans multiple series and includes outings in the newly-formed Gold Cup class of the GT World Challenge Europe. It essentially replaces the previous Am class in the endurance racing series and to be eligible, the driver crew has to consist of one pro racer (Maini), along with a Silver level (Haupt) and Bronze level driver (Scholze). The trio is splitting driving duties behind the wheel of a Mercedes-AMG GT3 – the same car that Maini drives in the DTM.

The 3-hour race at Imola was interrupted by multiple collisions. Around two hours in, HRT took advantage of this to slot in a pit stop and Maini rejoined the track in third place.

He held on to that position till the end of the race to hand HRT a podium finish. Speaking after the race, Maini expressed confidence that he and HRT can be championship contenders. “I think overall it was a good weekend for us, strong points,” Maini said. “In qualifying we had a bit of traffic, so we couldn’t optimise it. So I’m glad we made it up in the race. But still, I think we as a team want more and we’ll work really hard towards this. I think we can definitely be championship contenders and onwards to Paul Ricard, where I think we can fight for the win. Looking forward to it.”

Recently-retired MotoGP legend Valentino Rossi is also competing in the same series for Team WRT, as he makes the switch from two to four-wheel racing. However, he could only manage a 17th place result in the Silver Cup after a pit stop error.

Due to miscommunication in the heavy traffic in the pitlane, Rossi overshot the pit box position and had to do another lap before handing the car over to Fred Vervisch.

Rossi said, “It was a very good weekend, we worked a lot and well, and I enjoyed every moment.” He added,“In the race, I was strong, we could have gone for a good result, in the top-10, but unfortunately, there was this mistake at the pit stop, but we will learn from it. I still have to cope with a lot of new things in GT racing, where you have so many variables and information to handle, I guess this is what you call experience.”

Maini is also gearing up for his second year in the DTM. Last year he’d become the first-ever Indian driver to compete in the series, and scored his maiden podium result at the Norisring finale. While he continues to be a part of the Mercedes-AMG motorsport roster, he’s now joined HRT – the team that won the drivers’ title last year with Maximilian Gotz – for his latest outing.

The 2022 DTM season kicks off on May 1 at Portimao in Portugal. Eight rounds will be held this season, with a total of 16 races across Europe.