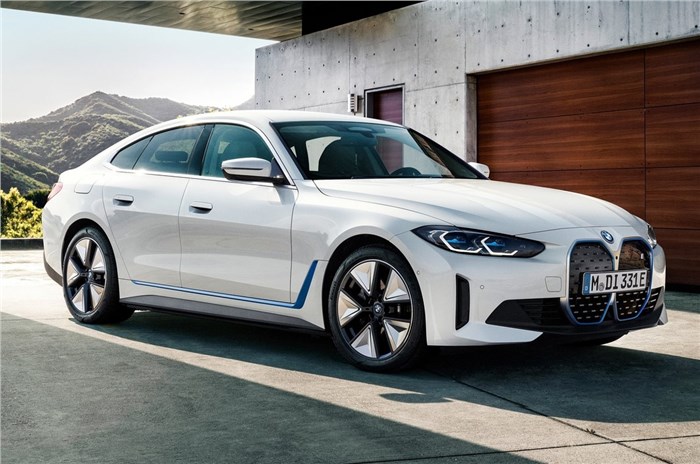 Along with the i4, BMW India will also launch the iX SUV and the Mini Cooper SE hatchback.

BMW thus far had fallen behind in the luxury EV race, seeing as its rivals Audi, Mercedes-Benz and Jaguar all have electric vehicles in their Indian portfolio. However, that is set to change as BMW India has now confirmed the launch of three all-electric vehicles over the next few months. The first of those launches will be the flagship iX SUV on Monday, while another will be the Mini Cooper SE hatchback, whose launch we’d reported about back in December 2019.

However, this is the first time that BMW has confirmed the launch of the i4 in India. Here’s what you can expect from the upcoming electric four-door coupe.

BMW i4: exterior and interior

The all-electric i4 is based on a specially adapted version of the 3 Series’ CLAR architecture. Measuring 4,783mm long, 1,852mm wide and 1,448mm tall, the i4 has similar dimensions to the conventional 3 Series sedan. In terms of design, the i4 is clearly visually related to the combustion-engined 4 Series. It features a distinctive cab-rearward profile, a large, closed-off kidney grille up front and slim LED headlights.

Inside, the i4 aims to offer “a richly involving driving experience”. There’s a free-standing 12.3-inch infotainment screen running BMW’s eighth-generation iDrive system, plus a 14.9-inch curved digital dial display, standard sports seats and blue accents throughout as nods to the car’s electric underpinnings. Three-zone automatic climate control is standard and ventilated seats are an option for both rows on the international version.

BMW i4: powertrain and battery

Internationally, the BMW i4 is available in two variants – eDrive40 and M50 xDrive. The entry-level eDrive40 version is rear-wheel drive only and it uses an electric motor that puts out 340hp and 430Nm. It is said to do the 0-100kph sprint in 5.7sec.

The all-wheel drive M50 employs a 258hp motor on the front axle and a 313hp motor on the rear axle, for a combined output of 544hp and 795Nm. The M50 also gets a unique Sport Boost function that can be used to liberate the full power output for around 10 seconds when driven in Sport mode. With this activated, the M50 can do 0-100kph in 3.9sec. However, it remains to be seen which version of the BMW i4 will be on offer in India.

The i4 stores uses a floor-mounted lithium-ion battery pack which has a gross (total) energy capacity of 83.9kWh and a net (usable) capacity of 80.7kWh. The battery is claimed to be 30 percent more power-dense than that used by the i3 hatchback.

The RWD variant boasts a WLTP range of 590km on a single charge, with the more powerful AWD version delivering a 510km range.

All prices are ex-showroom, India

Are you a fan of the all-electric BMW i4? Is it a good alternative to conventional sedans? Let us know in the comments.