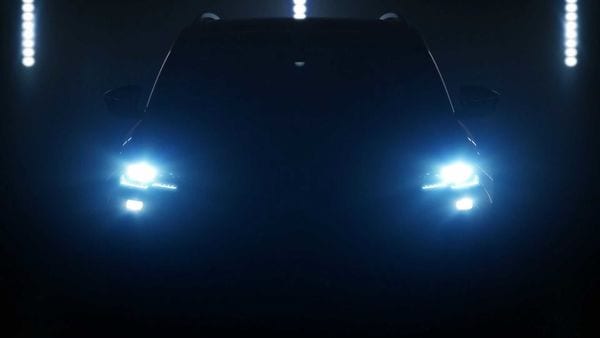 Skoda Auto has released a teaser video of the Karoq SUV facelift as the model is due for a mid-cycle facelift in markets across the world, including India. The video gives glances at various exterior angles of the SUV, revealing design changes. The new model will also come with new innovated interior and new tech upgrades.

The teaser video reveals the most noticeable differences on the car’s front profile. The facelift version gets a wider radiator grille and new, flatter headlights. Skoda’s typical characteristic four-eyes design has been retained but now there is a more dynamic look thanks to Full LED Matrix headlight technology.

Skoda Karoq appears in a golden-brown paint scheme featuring dynamic looking alloy wheels with aero elements just like those found in the new Fabia. At the rear, the vehicle looks similar to the outgoing version retaining the taillights and the shape. However, the ‘Skoda’ lettering makes a comeback in place of the company logo.

Skoda hasn’t yet given a sneak-peak into the cabin of the new Karoq SUV but it is expected to tease the interior ahead of its November 30 debut. Details about the specifications such as engine, transmission and other details have also been kept under the wraps. However, it is certain that there won’t be any plug-in hybrid version of Karoq anywhere in the world because that technology is being preserved for the Octavia and Superb.

The carmaker had earlier this month also revealed design sketches of the latest Karoq SUV, revealing a slightly more sporty exterior profile. While the global unveiling of Skoda Karoq will take place on November 30, its India launch expected in early 2022. Once launched here, the SUV will compete with the likes of Volkswagen T-Roc and Jeep Compass.

Skoda has recently also unveiled the new Slavia premium mid-size sedan in the Indian market and everyone is waiting for the price announcement.