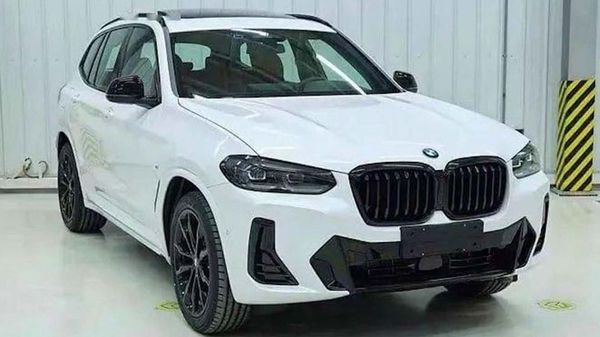 BMW X3 is about to receive a facelift in the world market later this year. Now the SUV has been leaked in a spy image ahead of its global unveiling. The leak shows the China-spec model in a fully uncamouflaged avatar throwing light on the key exterior design details of the SUV.

The X3 SUV has been updated with a larger kidney grille at the front in an all-black layout contributing to its sportier and more muscular appeal. The new single-frame grille is flanked by a set of reworked LED headlamps. Moreover, there is also a reprofiled front bumper and new vertical vents that distinguish the car from the earlier version.

Other notable additions to the exterior profile of the car include new alloy wheels, reprofiled LED taillights that now come tinted, along with a redesigned bumper with a tweaked diffuser.

As far as interiors are concerned details are yet to be revealed. In terms of mechanicals, the India-spec model may get the same 2.0-litre petrol and diesel engines. These units are likely to be paired with an eight-speed automatic transmission.

The existing BMW X3 SUV is sold in the Indian market in three trims – SportX, Luxury Line petrol and Luxury Line diesel. These are priced at ₹57.50 lakh, Rs. 62.65 lakh and Rs. 63.65 lakh, respectively. (All prices are ex-showroom). Expect the updated model to have a slightly higher price tag.

This TVS bike rocked, sold out as soon as it was launched