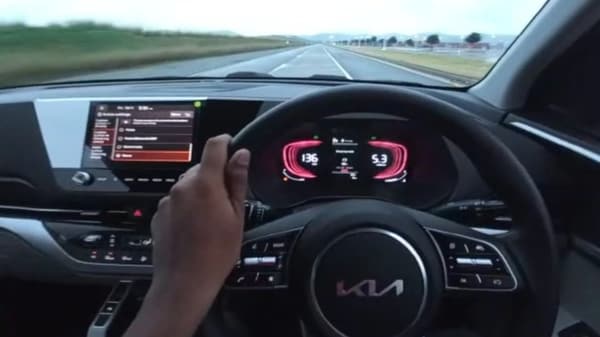 Kia all set to drive in its fourth product in India next month with the debut of KY, codename for a new three-row car which is likely to be called Carens when launched. It is likely to be offered in six- and seven-seat variants and is likely to be positioned below its premium luxury MPV Carnival.

Kia KY, or Carens, is likely to be a more affordable offering from the Korean carmaker to tap the growing three-row SUV/MPV segment in India. After the launch of Hyundai Alcazar and Tata Safari, Kia does not want to be left behind. The segment also features the likes of Maruti Ertiga and XL6, besides Mahindra Marazzo and Renault Triber.

Recent images leaked online has revealed how the interior of the new Kia KY might look like. It shows a typical three-spoke steering wheel with several controls mounted on it, including cruise control. Also visible is a large digital driver display and even larger infotainment screen on the dashboard.

Kia KY is likely to be based on the same platform used for the Korean carmaker’s flagship model Seltos. In all likelihood, it is probably going to be a three-row avatar of the Seltos with certain design tweaks and feature additions. It is likely to be Kia’s answer to its Korean sibling Hyundai Alcazar, a three-row version of the Creta.

Kia KY will be officially unveiled on December 16 while the carmaker has confirmed an official launch slated for the first half of next year. “We are happy to announce that Kia India will introduce its new product KY in Q1 of 2022. With KY, we will be kick starting our next India growth phase to consolidate our business and operations,” said Tae-Jin Park, MD and CEO at Kia India.

Under the hood, Kia KY is likely to be powered by the same 1.5-litre diesel engine that powers Seltos SUV besides the 1.4 litre turbo petrol. The diesel mill is capable of generating 115 hp of maximum power and 250 Nm of peak torque. Both engines are likely to come mated with manual and automatic transmission options.