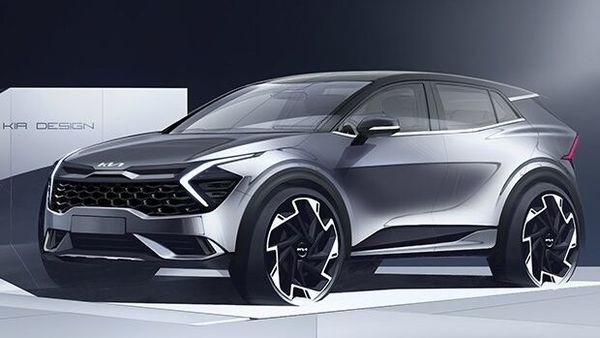 The new Kia Sportage SUV will present a more compact and daring profile, according to the sketches revealed by the Korean carmaker. Designed to be the most dynamic and elegant SUV in its segment, the new Sportage SUV will feature a muscular footprint and a powerful yet refined silhouette, with crisp character lines that stand out and run across surfaces.

The 2022 Kia Sportage SUV for the European markets is likely to be a bit more compact than the versions available in Korea. Kia has also confirmed that the two models will have different lengths.

The new Kia Sportage SUV will have a bold front design with a black grille graphic that highlights the details and spans the full width of the front. A new floating interpretation of Kia’s iconic tiger nose grille is paired with distinctive boomerang-shaped LED DRLs and Matrix LED headlights.

A first in the Sportage range, the sketches show a black roof that further accentuates the sporty profile of the new SUV, while highlighting a dynamic treatment in the C-pillar design.

The 2022 Kia Sportage SUV is likely to get the same engine that powers the Hyundai Tucson SUV in Europe. This means that it will be available in petrol and diesel powertrains, both with microhybridization, hybrid versions and plug-in hybrids.