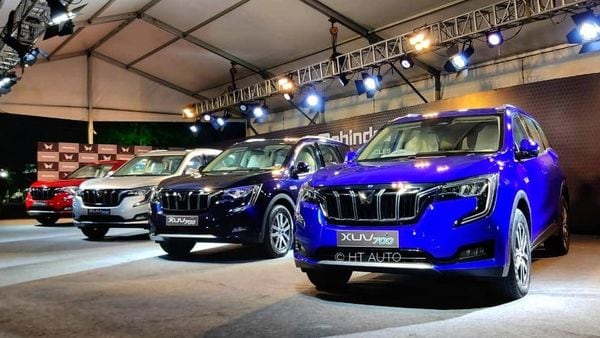 Mahindra XUV700 has raced to a solid start in the Indian car market with 65,000 bookings since the reservation window was opened two weeks ago. Mahindra revealed the bookings’ figure on Wednesday and added that deliveries of the petrol variant will start from October 30 while diesel XUV700 units will be delivered from the last week of November.

Such has been the furious pace of bookings that Mahindra states it has partnered with a ‘top’ global consulting company to devise and implement an algorithm-based process. This is with the objective of streamlining the delivery process for customers, based on a combination of parameters which include, quantum of bookings at city and dealer level, ratio of online and bookings at dealer counters and variant-level production feasibility based on supply chain constraints.

The first phase of bookings for Mahindra XUV700 was opened on October 7 and the mark of 25,000 was reached in under one hour. The introductory prices were then revised for the next 25,000 bookings which were reached within two hours on October 8.

Available in four broad variants – MX, AX3, AX5 and AX7, Mahindra XUV700 seeks to score by offering multiple options across multiple factors. The SUV is available with petrol as well as diesel engine choices, in five and seven-seat layout, with manual as well as in automatic transmission options while also sporting multiple exterior body hues.

XUV700 is the successor to XUV500 and seeks to differentiate itself with several big-ticket updates. It is the first vehicle to sport the new Mahindra logo for SUVs and also gets a prominent front grille with LED projector head lights and C-shaped LED DRLs on either side.

XUV700 also gets sporty alloys and LED tail lights. There are also smart door handles that auto open and close.

XUV700 has quite a loaded cabin with several high-end as well as segment-first features. It gets a 12-speaker Sony audio system with 3D sound, largest-in-segment sunroof, large 10.25-inch touchscreen and electronically-adjustable driver seat with memory function. The infotainment system gets Alexa voice integration support. The XUV700 also gets an all-digital driver display.

XUV700 has been made available with both petrol and diesel engine options. The Mahindra XUV700 gets an mStallion 2.0 turbo-petrol motor that belts out 200 hp peak power and has 380 Nm of torque. The diesel motor is a 2.2-litre mHawk engine that churns out 182 hp of power and 450 Nm of torque. One can also choose between manual and automatic transmission options.