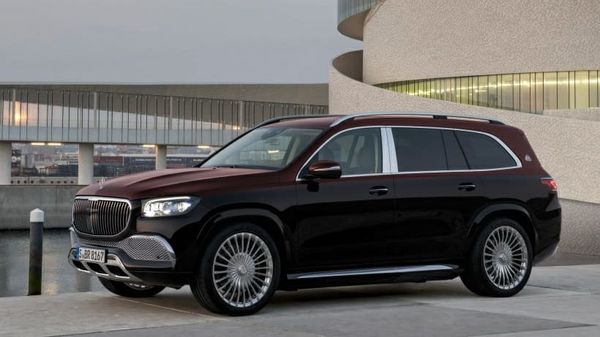 Mercedes GLS Maybach 600 4MATIC is all set to be launched in India on June 8. The German carmaker has announced the date for the launch of the the ultra luxury SUV, which will be one of the 15 launches Mercedes-Benz has planned for India this year.

Mercedes had earlier confirmed that the GLS Maybach will make its India debut next week.

The Mercedes-Maybach GLS 600 4MATIC ultra luxury SUV was first showcased two years ago for the global market. The GLS Maybach will come with an imposing radiator grille and the Maybach emblem on the exterior body. The SUV sits on 22 and 23-inch wheel options in markets where available. The exterior gets a dual-tone colour scheme as well.

The Mercedes GLS Maybach 600 for the global markets is powered by a 4.0-litre twin-turbo V8 petrol engine with a 48-volt on-board electrical system and integrated starter-alternator (ISG). The engine is mated to a 9G-Tronic automatic unit. It can generate 558 Ps of power and 730 Nm of torque. The EQ Boost can help boost up performance by an additional 250 Nm of torque and 22 Ps of power.

The cabin of the Mercedes GLS Maybach 600 is SUV is offered with a choice of either four or five-seater configurations, and is one of the most luxurious on offer by the German carmaker. It gets a12.3-inch main infotainment system with MBUX, a 12.3-inch driver display, Burmester surround sound system, ambient lights, and a panoramic sunroof. For more creature comforts, Mercedes has added climatised massage seats, folding tables and even a refrigerator for the occupants.

At the rear, passengers get added legroom with 120 millimetres extra space to push back seats than one can in the Mercedes-Benz GLS. The backrest too can be inclined by up to 43.5 degrees that allows a more comfortable seating position for long drives.

When launched, the Mercedes GLS Maybach 600 SUV will take on rivals like the Bentley Bentayga, Rolls-Royce Cullinan and the Range Rover SUVs.