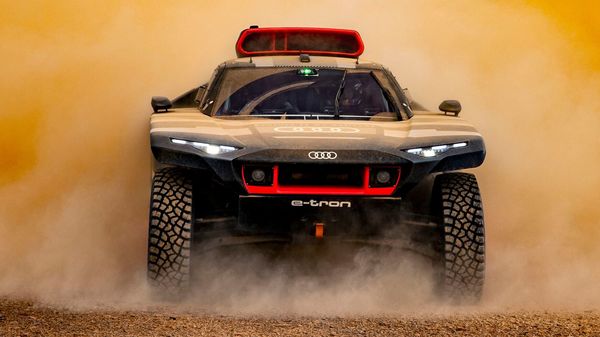 Audi has put the RS Q e-Tron through rigorous testing to check its endurance on the sand dunes of Morocco last week. The electric car has been specifically modified from its passenger car version for the purpose of rally races, and is set to make its debut at the Dakar Rally in January next year.

The rally-spec RS Q e-Tron headed to Morocco after it was tested in Germany and Spain. Former Dakar Rally winner Stephane Peterhansel, Carlos Sainz and Mattias Ekstrom were trusted again at the wheels to see if the electric car can survive the dust, heat and sandstorm in the north African nation.

“The thermometer climbed to well over 40 degrees Celsius at times. Sandstorms also hampered the testing. In addition, as expected, some new problems arose in the high temperatures, which repeatedly caused interruptions to the testing and needed to be solved before the next test,” said Sven Quandt, team principal of Q Motorsport.

The high-voltage battery, which was developed specifically for the Dakar Rally, was one of the key interests during the two weeks of testing. “It’s all about optimum temperature management and being able to call up the battery’s maximum performance. This is where we are learning with every test. And that’s exactly why we are going to the desert with an electrified drivetrain: We are gaining an incredible amount of experience that we are sharing with our colleagues from road car development,” said Roos.

Audi transformed the performance vehicle with electric powertrain into an off-road beast. It features dirt rally-specific updates like fitting the front and rear axles with a motor-generator unit (MGU), sourced from the Audi e-tron FE07 Formula E car. It was developed by Audi Sport for the 2021 season. The motor-generator unit has undergone minor modifications to make it fit for the Dakar Rally.

Audi has also added a third MGU which is identical in design and is part of the energy converter. It serves to recharge the high-voltage battery while driving. The energy is also recuperated during braking. The weight of the battery is about 370 kilograms and it has a capacity of around 50 kWh.

Audi Sport is busy building the first RS Q e-Tron intended for the Dakar Rally with chassis number 104. The one that was put to the test was merely a prototype. “In the case of the actual competition cars, we’re aiming for absolute perfection in terms of accurate fit,” said Benedikt Brunninger, Audi Sport Project Manager for the Dakar Rally.

The Darkar Rally event lasts for two weeks and in the marathon, the daily stages are up to 800 km. Andreas Roos who is responsible for the Dakar project at Audi Sport says that with such a long distance, the automaker is taking the ultimate challenge of pushing the performance of an electric drivetrain.