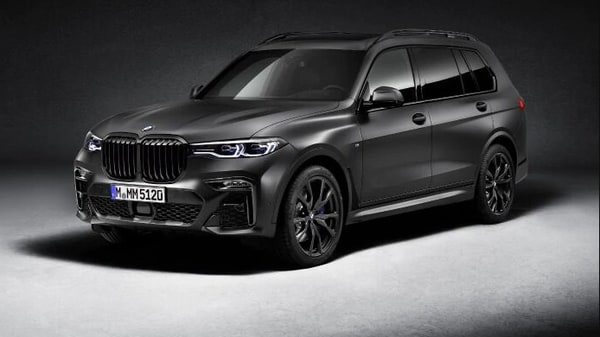 BMW is gearing up for the launch of the ultra-exclusive X7 Dark Shadow Edition SUV in the Indian market. The company took to Twitter to announce the news but later took the post down.

The Dark Shadow Edition of the BMW’s flagship SUV was introduced in 2020. What makes it an exclusive vehicle to own is the fact that it is limited to just 500 units worldwide. It comes based on the range-topping M50i variant that features a menacing black dipped exterior paint theme.

(Also Read: After Audi and Mercedes, BMW too extends service and warranty timelines)

When launched in India, this special edition SUV is expected to cost in excess of ₹1 crore (ex-showroom).

On the outside, the SUV gets a Frozen Arctic Grey body colour in a metallic shade. To give exteriors a more intimidating look, the SUV gets black bits over its kidney grille, roof rails, and tailpipes. It rides on a bespoke set of 22-inch V-spoke M light-alloy wheels that adorn a Jet Black matt finish to complement its dark body theme.

Inside, the dark treatment is continued with a fresh two-tone blue and black cabin. It sports a classy-looking Merino leather upholstery and Nappa leather that can be found on the car’s upper dashboard, door panels as well as armrests. Its other tweaks include black Merino leather which is limited to the lower section of the instrument panel.

Some of the key cabin highlights of this special edition model include a Bowers & Wilkins Diamond Surround sound system, rear-seat entertainment, a panoramic sunroof, head-up display, and massage functionality for the front seats.

Under the hood, the car gets a 4.4-litre, twin-turbo V8 petrol engine that is rated to deliver 530PS of maximum power and 750Nm of torque. The engine comes married to an 8-speed automatic gearbox. This setup propels the SUV across 0-100 kmph in a matter of just 4.7 seconds. Its top speed is electronically restricted to 250 kmph. It also sports a BMW sports exhaust system.