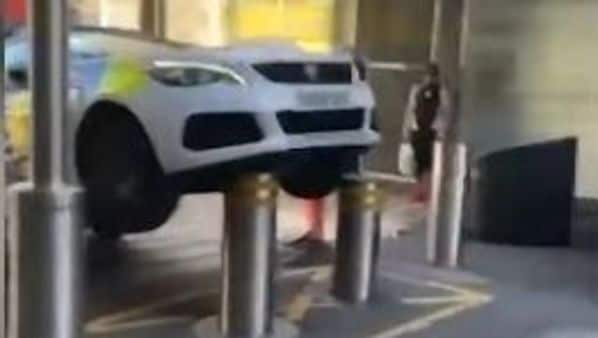 Parking a car in a tight urban space can be a tedious job. Also, it requires great caution and double-checks before selecting the parking spot. Otherwise, you might end up in an unwanted situation or even your car might get damaged as well.

Exactly this happened with a police car in Leeds, UK, when the Peugeot 308 was badly damaged by retractable bollards.

A video has emerged online showing the police car raised into the air by its nose. According to a report, the car was parked on the retractable bollards and suddenly there was a loud bang. The bollards that extend and retract from the ground on a timer to block the sidewalk for the cars, impaled the police car.

The impact caused damage to the underbody of the Peugeot 308 police vehicle. The video shows that one of the bollards was damaged as well. The car was stuck there for quite some time. According to the report, the recovery crewmen had smiles on their faces while dealing with the incident.

The Leeds police department has said that the vehicle would be inspected and repaired before being deployed again.

Parking a vehicle in a congested urban area is often a very tedious task. The spaces on the roads are narrow. Not all spaces are available for parking a vehicle. This makes the case of vehicle parking a real tough deal for many. While police usually check these cases where to park or where not to, this time, the keepers of the law were at the receiving end for their own miscalculation.