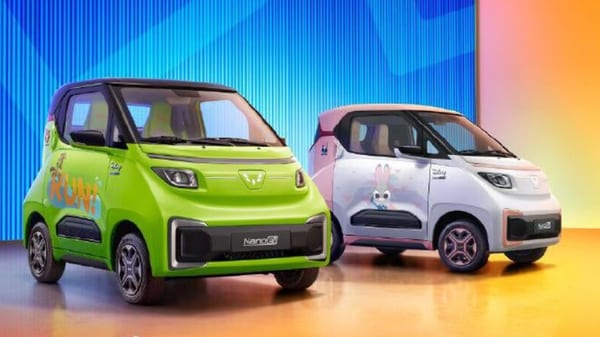 After massive success with its Mini electric car, which was the second-best-selling EV with 119,255 units in 2020, Chinese carmaker Wuling HongGuang has come up with a new one. It has decided to call it Nano, a name Indians associate with Tata Motors for its smallest production car ever.

Wuling Nano is not only going to be the smallest electric car to go into production.

It could also become the world’s cheapest electric car if reports are to be believed.

According to a report by CarNewsChina, the Wuling Nano EV will be sold at a price not exceeding 20,000 yuan (roughly converted to ₹2.30 lakh). This means the Nano EV could actually cost even less than a Maruti Alto. If it is true, then Nano will certainly be cheaper than Wuling Hongguang Mini EV, the best-selling compact electric car in China.

The model looks like an alternative version of the Baojun E200, also produced by Wuling. Designed for urban use, this Nano EV has only two seats, and a turning radius of less than four meters.

The Nano EV is equipped with a 33 PS electric motor and can generate a maximum torque of 85 Nm. It can also go up to speed of 100 kmph.

The Nano EV will have an IP67-certified lithium-ion battery placed under the seat, with a capacity of 28 kWh. The battery allows this small electric car to travel 305 km on a single charge. According to Wuling, the battery takes 13.5 hours to recharge fully using a regular 220-volt domestic socket. It also comes with a 6.6 kW AC charger option that can recharge the EV in just 4.5 hours.

Despite its size, the NAno EV is not short of safety features. It comes with electronic stability control system (ESC) of ABS brakes along with EBD, electronic parking brakes, Isofix child seat mounts. It also comes with a low speed pedestrian warning system.