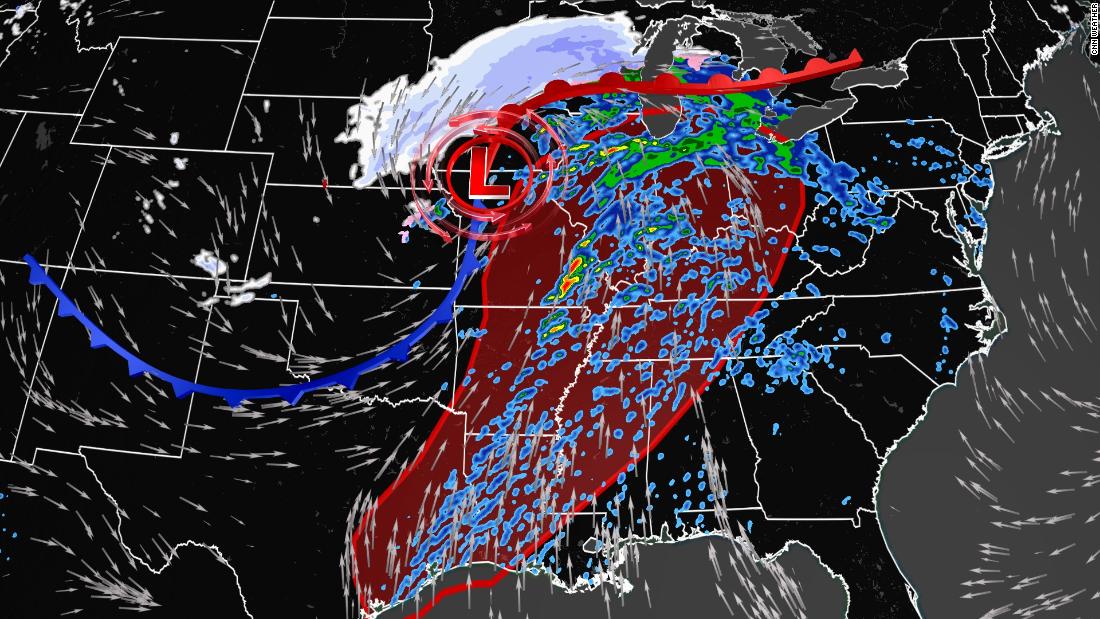 Severe weather developed late Friday from the lower Mississippi Valley to central Ohio ahead of a strong cold front, with the greatest threat for nighttime tornadoes stretching from Arkansas to Indiana.

In Monette, Arkansas, emergency crews went to a nursing home damaged by storms, said LaTresha Woodruff, spokesperson for Arkansas Emergency Management. She said there were reports of injuries and entrapments at the Monette Manor nursing home.

A tornado moved through the northeast corner of the state just after 7 p.m. CT, according to the National Weather Service.

Over 55 million people nationwide are at risk for severe storms Friday.

“This dynamic, sprawling storm will impact more than half the country. It’s a classic clash of air masses,” said CNN meteorologist Gene Norman.

As cold, arctic air surges south it will clash with record warm and humid air in place across the South, sparking severe storms where the air masses meet.

The watch is in effect until 11 p.m. CST and includes Memphis, Tennessee; Little Rock, Arkansas; Paducah, Kentucky; and Evansville, Indiana.

Strong thunderstorms are expected to develop with storm coverage increasing through the evening. In addition to tornadoes, wind gusts up to 75 mph and hail up to 2 inches in diameter are also possible.

By mid-evening Friday, five tornado watches stretched from northeastern Texas and eastern Oklahoma to central Tennessee and Kentucky. One of the newest watches includes Nashville and Louisville, Kentucky, and is in effect until 2 a.m. CST.

A moderate risk of severe storms — level 4 out of 5 — has been issued for over 2 million people, including in the city of Memphis, by the Storm Prediction Center. This area has the greatest probability of strong EF2-EF5 tornadoes with winds of at least 111 mph or higher possible.

The last time there was a moderate risk of severe storms issued in December was December 16, 2019.

“The main concerns will be for occasional tornadoes (some potentially capable of EF2+ damage) and scattered, damaging thunderstorm gusts,” the prediction center said Friday morning. “Though late-afternoon development near the front is possible, the overwhelming majority of strong-severe convection should be after dark.”

Severe storms developing after dark pose a significant threat for nighttime tornadoes to occur, some of which may be strong, according to prediction center.

Southern states including Tennessee, Kentucky and Arkansas experience more overnight tornadoes than any other region. This can lead to higher fatalities, since many people are sleeping and unaware that a tornado is approaching.

This is why it is important to have an alert system such as a weather radio or an app on your phone that can wake you up if a tornado watch or warning is issued for your area.

Winter returns for a large section of the US

On the northern part of this system, snow will blanket a large part of the country from the Intermountain West to the Upper Great Lakes through Saturday. Over 10 million Americans are under some form of winter weather alerts from this system.

The Minnesota State Patrol responded to 136 crashes prior to 4 p.m. on Friday, according to a tweet by the agency. Eight of those accidents were jackknifed semi-trucks. Thirteen were injury accidents.

The Twin Cities area is currently under a snow emergency.

Light snow fell Friday morning at Denver’s International Airport, meaning the area finally recorded its first measurable snow of the season, defined as a 10th of an inch or greater.

The city also went 232 consecutive days without measurable snow, the second-longest streak in recorded history. The record is 235 days: from March 5 to October 25, 1887.

The snow is expected to be light in Denver, with the forecast calling for around 1 inch of accumulation today, with higher tallies in the mountains to the West.

Elsewhere, many motorists will be forced to test their winter driving skills for the first time this season as conditions quickly deteriorate under a band of heavy snow from Cheyenne, Wyoming, to Marquette, Michigan.

“Given this is the first widespread and significant snowfall of the season, residents in these areas are urged to plan ahead and take proper precautions if venturing out into the storm,” explained the prediction center.

Snowfall rates of 1 to 2 inches per hour are possible tonight into Saturday morning across a large stretch of the Upper Midwest and Great Lakes region.

A widespread area of 6 inches of snow is anticipated, with up to a foot possible where the center of the low-pressure system pivots and dumps the heaviest snowfall. This area includes southern Minnesota, northern Wisconsin and portions of Michigan’s Upper Peninsula.

Heavy snow will be accompanied by strong gusty winds that will make travel conditions extremely difficult.

Blowing snow from winds gusting over 50 mph will reduce visibilities and create slick roads from the Central Plains to the Upper Great Lakes. Potential travel impacts could be greatest across the heavily traversed Interstate 90 corridor.

As the storm pushes east late Friday, it will intensify, allowing for howling winds to develop.

A High Wind Watch is in effect from Saturday morning through Saturday evening for much of southern Michigan, including Detroit, where southwest winds of 20 to 30 mph with gusts into up to 60 mph are possible.

This could lead to downed trees and power lines. “Widespread power outages are possible,” the weather service warns.

Those high winds will also impact areas in and around Lake Michigan, including Chicago, as a gale watch remains in effect from late Friday night through Saturday afternoon.

As the storm moves across the area, northwest winds of 25 to 35 knots are expected with gusts up to 45 knots along with 6- to 13-foot waves.