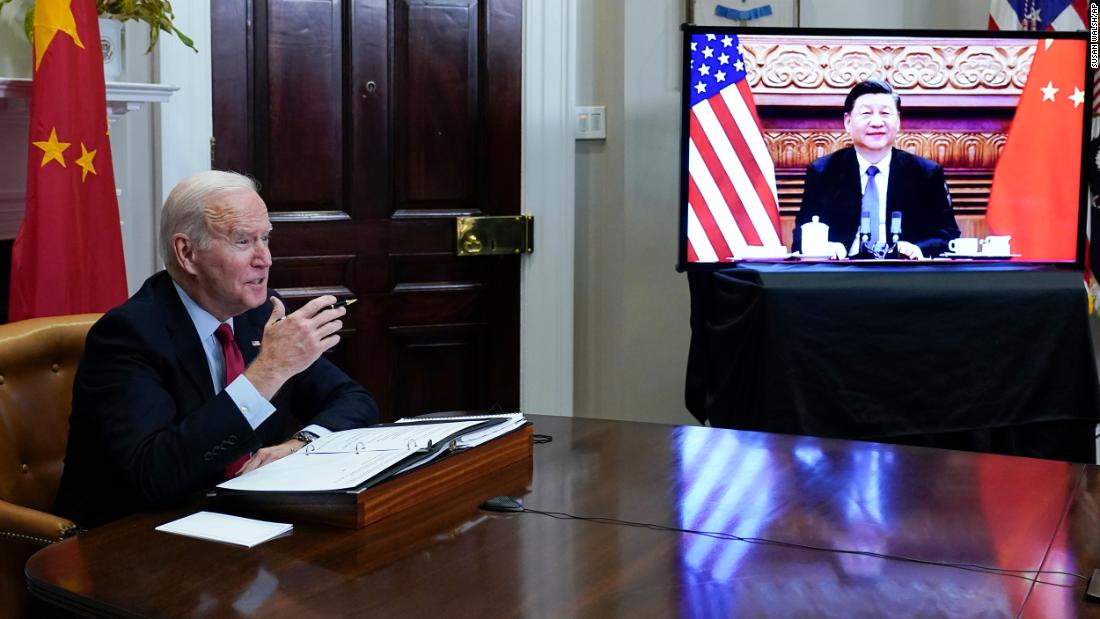 US-China relations, which came to a near total breakdown during the final year of President Donald Trump’s term, had descended into open hostility during more recent high-level bilateral meetings — including March’s now infamous Alaska Summit, during which diplomats from both sides traded barbs.

And though Monday’s virtual summit between the two leaders saw no substantive policy on key issues such as climate, trade, the pandemic, or arms control, it did establish a dialogue that can be built on, potentially easing tensions — and allowing for a return to a more constructive, stable relationship.

But while the mood music coming from both countries is undoubtedly positive, a closer examination suggests Beijing felt it had more to cheer.

The Chinese Communist Party (CCP) views “reunification” with Taiwan — a self-ruling democracy it has never governed — as a key unresolved issue on China’s path toward its “great rejuvenation.”

That a US President would potentially agree with China’s view on this issue is therefore a big propaganda win. But according to a readout of the meeting from the White House, that’s not quite what Biden said — in fact the US readout didn’t mention independence at all.

Biden later offered further clarification on the issue during remarks Tuesday evening, “We made very clear we support the Taiwan Act, and that’s it,” said the President, adding that Taiwan “makes its own decisions.”

In what is known as the US “one China” policy, Washington acknowledges Beijing’s position that Taiwan is part of China, but has never endorsed the CCP’s claim of sovereignty over Taiwan. It maintains close unofficial ties with Taipei, and is obligated to support the island with the means to defend itself under the Taiwan Relations Act.

A 3,900-characters readout released by China’s Foreign Ministry again cited Biden as saying the US does not support Taiwan independence, but it did not mention Washington’s strong stance against “unilateral efforts to change the status quo.”

Instead, it showed Xi taking a direct swipe — and making a veiled threat — at Washington.

According to the Chinese readout, Xi blamed rising tensions across the Taiwan Strait on what he called Taipei’s attempt to “rely on the US to seek independence,” as well as “the intention of some Americans to use Taiwan to contain China.”

“Such moves are extremely dangerous, just like playing with fire. Whoever plays with fire will get burnt,” Xi told Biden, according to the Chinese readout.

“We have patience and will strive for the prospect of peaceful reunification with utmost sincerity and efforts. However, if the ‘Taiwan independence’ separatist forces provoke, compel or even cross the red line, we will have to take drastic measures,” Xi added.

Such strong rhetoric is likely to resonate with China’s domestic audience, many of whom staunchly support unification with Taiwan.

Xi further cemented his power at a key Communist Party meeting last week, paving the way to secure a third term and beyond in office. And now, he is portrayed domestically as having emerged triumphantly from the meeting with Biden, too.

“Of course, in China, they have to claim victory. That’s why they emphasized that the Biden administration has reiterated its opposition to Taiwan independence,” said Jean-Pierre Cabestan, an expert on Chinese politics at Hong Kong Baptist University.

For Beijing, the optics of the meeting is at least as important as its content.

In the Chinese capital, the virtual summit was held in a gold-painted, red-carpeted hall in the Great Hall of the People. Xi and Biden’s faces appeared side by side on a massive screen livestreaming the meeting, while Chinese leaders, including Xi himself, sat meters away in a row on the other side of the room — a markedly different setup from what US officials had in the Roosevelt Room of the White House.

According to the Chinese readout, Xi likened China and the US to two giant ships at sea, each needing to be steered steadily to avoid collision.

“In a sense, it gives China a lot of face, a lot of status — great power status. Biden has accepted to talk to China on an equal footing, mentioning the key issues both countries need to tackle together, from climate change, North Korea to Afghanistan,” Cabestan said.

And for Xi, building bridges with Biden and attempting to bring bilateral relations on a more normal track helps his domestic political agenda too.

“President Xi of course, is moving into a very political year,” said Paul Haenle, director of the Carnegie-Tsinghua Center for Global Policy, citing Xi’s attempt to seek an unprecedented third term in power at the 20th Party Congress next fall.

“So this (will be) an important year and President Xi I think, will largely be focused on removing those risks and those uncertainties in the US-China relationship so that he can really focus on the domestic politics in preparing for the Party Congress,” Haenle said.

Clearly, it’s in Xi’s best interests to minimize risks ahead of the congress and establish a stable US-China relationship — putting up guardrails to prevent unforeseen incidents from spilling into conflict.

Ryan Hass, a senior fellow at the Brookings Institution, said domestic factors will likely play an outsized role for both leaders in the coming year.

“Neither leader will want to be seen as softening his approach toward the other, but at the same time, neither leader will see profit in allowing the relationship to escalate significantly beyond current levels of tension,” he said.

“As such, the relationship likely will navigate between a pretty firm floor and ceiling over the coming year.”