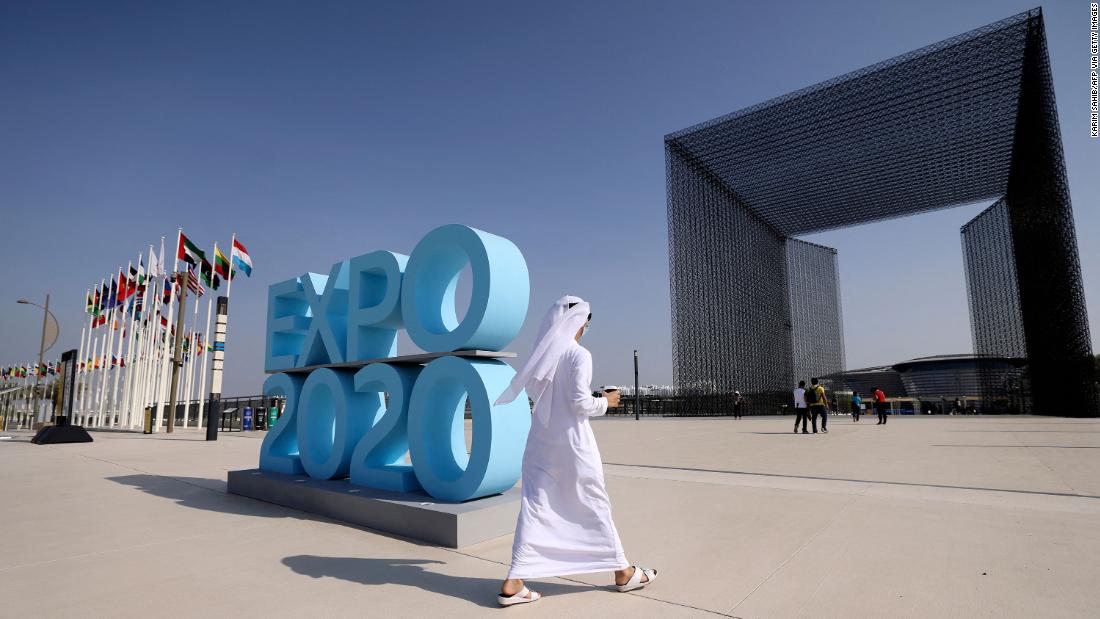 A record 192 countries are represented at this year’s postponed Expo — up from 139 at the previous World Expo in Milan — among them, of course, the world’s most poverty-stricken, war-torn and unstable.

Aided by funding from the Emirati government, all of them are using Expo 2020 to present a polished image that might attract investment or tourists, but the strife from back home lurks just under the surface.

Tucked away off the main pedestrian walkway, the modest Myanmar pavilion is filled with photos, clothing and cultural items native to the South Asian nation — in an attempt to represent the regional and religious diversity of the majority Buddhist country.

Levi Sap Nei Thang, the pavilion’s deputy director, says she was appointed by the previous, democratically elected government of Aung San Suu Kyi. “Deputy” was added to Thang’s title after Myanmar’s military took control of the country in February, arrested Suu Kyi and cracked down on nationwide protests. Technically, they’re now in charge of the pavilion too.

Thang herself is a perfume entrepreneur and a household name in Myanmar, thanks to her philanthropic work. She has also made headlines in the United States recently over her purchase of oil and gas leases.

Back in Dubai, Thang told CNN that she has been planning the Expo exhibit for years, aiming to promote trade and attract visitors to Myanmar, but conceded that “it may not be a good time now [for tourists].”

The Expo runs until March 2022 and Thang says she expects that at some point Myanmar’s military junta will “send a new team” to take over the pavilion, just as they have taken over the country. She said she recently declined a call with a minister seeking to discuss control of the pavilion. If she’s pushed out, however, Thang said she won’t stick around.

“I do this for my people, not for any political parties,” she told CNN. Myanmar’s military government did not respond to requests for comment from CNN.

Myanmar’s pavilion is not the only one to be caught up in a government overthrow. Afghanistan’s pavilion stood empty for days at the start of the Expo on October 1, after the Taliban takeover of the country left a vacuum in its management. Now, an Afghan antiquities collector from Austria, Mohammed Omer Rahimy, has opened the pavilion after being called in by the Expo’s organizers and struggling with customs delays.

Rahimy told CNN that he represents neither the previous government nor the Taliban, and has taken up the task for the Afghan people. Indeed, there is no sign of Afghanistan’s turmoil in the displays of colorful traditional clothing, ornate antique jewelry and elegant brassware, including a mortar and pestle from the 12th century.

Rahimy takes great pains to make clear that he is non-partisan — in fact, he says he has curated items for the Afghan pavilion on behalf of several regimes since the 1970s at more than a dozen expos — and said he only wants peace for his country, no matter who is in charge. Rahimy said his goal was to showcase Afghanistan’s rich cultural history, and promote investment and buyers for the country’s exports, like saffron, which is on sale in small vials at the pavilion.

“Any regime comes to Afghanistan, then five years, four years later, the next regime comes. For me, my people are what’s important,” he told CNN.

Many of the country pavilions at Expo 2020 are built with funding from the Emirati government, though organizers declined to detail cost-sharing arrangements. Private sponsorship is also a major source of funding, but individual governments are ultimately supposed to be in charge.

In the Syrian pavilion, there is no doubt that President Bashar al-Assad, accused of using chemical weapons on his own people, is in control. His portrait hangs among 1,500 Syrian-made wooden paintings meant to collectively represent the country’s national unity — despite it being torn apart by a decade of civil war. A historical timeline of Syria makes no mention of that conflict.

The pavilion was financed by the Emirati government and Syrian businesspeople, according to designer and director Khaled Alshamaa. Syria’s economy minister, Mohammad al-Khalil, was there to open the pavilion and Alshamaa, is encouraging tourists to return the country.

“It’s totally safe,” insisted Alshamaa. “Now, we’re trying to build our economy back. The war is over in 99% [of Syria].” Airstrikes and terror attacks are still frequent in the country, however, and civilian casualties remain common.

Similarly, the Yemeni pavilion showcases a 330-year-old manuscript, and some of the Gulf’s rarest swords — but makes no mention of the brutal war and humanitarian crisis in Yemen over the past seven years.

Perhaps the oddest contradiction is the Lebanese pavilion. A striking solid gray structure with minimalist black statues outside standing guard, inside, the presentation bears no resemblance to the current economic state of the country. Lebanon is still recovering from the Beirut port explosion that killed hundreds and injured thousands — as well as a worsening economic crisis that has wiped out the value of the Lebanese pound, and with it, the life savings of ordinary people. Severe food, fuel and medicine shortages have helped push almost three-quarters of the population into poverty, according to a recent United Nations report.

Yet, inside the pavilion, visitors are greeted by an immersive video experience that could easily double as an ad for the Lebanese tourism ministry, with scenic aerial shots highlighting the country’s natural beauty.

“The news will cover the unsanitized version of Lebanon,” explained Nathalie Habchi Harfouche, the pavilion director. Harfouche doesn’t work for the Lebanese state. When the country’s dysfunctional government, plagued by allegations of corruption abandoned plans to operate the pavilion in 2019, a coalition of private sponsors headed by the Lebanon Chamber of Commerce and the diaspora in Dubai stepped in to salvage the project, organizers said — aided by funding from the United Arab Emirates. The logo of the Lebanese Ministry of Economy adorns the wall, but Harfouche said that is out of necessity more than anything since technically pavilions must be government-backed.

“We’re not carrying water for the government, we’re not doing their job, we’re doing it for the people. If they’re not willing to do it, then we’ll do it. If this means our survival, then so be it. We want to survive and we’re going to survive as a people,” she told CNN.

Past the gift shop filled with soaps and jewelry, there’s an attractive bar with a curated selection of Lebanese wine. Harfouche said the pavilion’s display will evolve and change over the next six months — including content that “depicts the reality, but yet in an artistic way.” Still, she has no plans to make the pavilion overtly political.

“Why would I do that?” she asked. “I don’t want to think about the government. This is an apolitical entity here.”

Harfouche said her goal is to encourage tourism and badly needed investment to help rebuild Lebanon’s battered economy, and ultimately, aid its people.

Expo 2020 has shelled out large amounts of money to ensure that as many countries as possible are represented here. Spokesperson Sconaid McGeachin declined to get into cost details, but told CNN that: “This [financial support] provides every country to tell their narrative about their culture and heritage and their focus for the future.”

Every nation represented here is presenting a narrative, of sorts, but many of them are far from the full story.