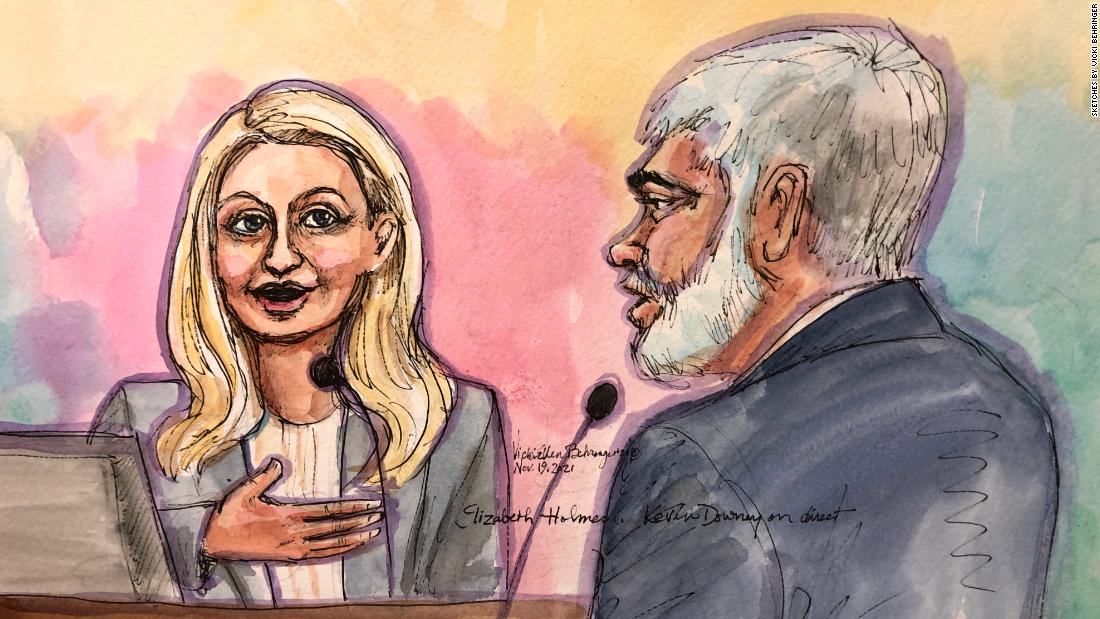 Holmes began testimony on Friday afternoon in the San Jose courtroom during the first day of the defense’s case. She is also expected to testify on Monday and Tuesday next week, the only days court is in session.

Holmes, once hailed as the next Steve Jobs, faces 11 federal fraud charges over allegations that she knowingly misled investors, doctors, and patients about her company’s blood testing capabilities in order to take their money. Holmes has pleaded not guilty and faces up to 20 years in prison and a fine of $250,000, plus restitution for each charge.

Whether Holmes would testify was a big question looming over the trial. She has attended the trial each day, typically with a family member. On Friday, her partner, mother and at least one person who appeared to be her friend were in attendance. She was smiling as she took the stand and during much of her testimony.

Some of the first questions from her defense attorney sought to establish the background of the company’s origin, including how she was a chemical engineering student at Stanford University and her first patent application.

“I started with talking to my parents and they let me take the monies that they’d saved for me to be able to go to college to work on my patent,” she testified. “Then I went to try to raise or borrow money.”

“Were you able to?” her attorney asked.

The original patent was not for blood testing. Rather, she started with the idea of a pill that could be swallowed without any other actions needed, she said.

Holmes went on to explain the evolution of her idea from a pill to a patch to a bench top device.

“As I started talking to people about what could be useful, I learned people were interested in a bench top or tabletop device and we moved to trying to build that,” she said.

Holmes’ attorneys previously indicated in court documents that she may claim she was the victim of a decade-long abusive relationship with Ramesh “Sunny” Balwani, who served as the company’s COO. They indicated that she is “likely to testify herself to the reasons why she believed, relied on, and deferred to Mr. Balwani,” who is nearly 20 years her senior. The filings were from 2020 and unsealed just before the trial kicked off with jury selection in late August. Balwani, according to a court filing from his attorneys, “adamantly denies” the claims.

Her attorneys also indicated plans to have an expert testify about the psychological, emotional and sexual abuse she experienced at the hands of Balwani.

A Stanford University dropout, Holmes founded Theranos in 2003 at the age of 19 with the mission to revolutionize blood testing. Inspired by her stated fear of needles, the company promised patients the ability to test for conditions such as cancer and diabetes with just a few drops of blood. Once valued at $9 billion, Theranos had struck up partnerships with Walgreens and Safeway, and a who’s who list of board members and investors.

Then it all came crashing down. A damning investigation by The Wall Street Journal in October 2015 called into question the capabilities of the company’s proprietary blood testing machine, Edison, as well as Theranos’ testing methods. Theranos was subsequently sued by investors for fraud and had its US blood-testing license revoked. The firm settled “massive fraud” charges with the Securities and Exchange Commission and ultimately dissolved in September 2018.