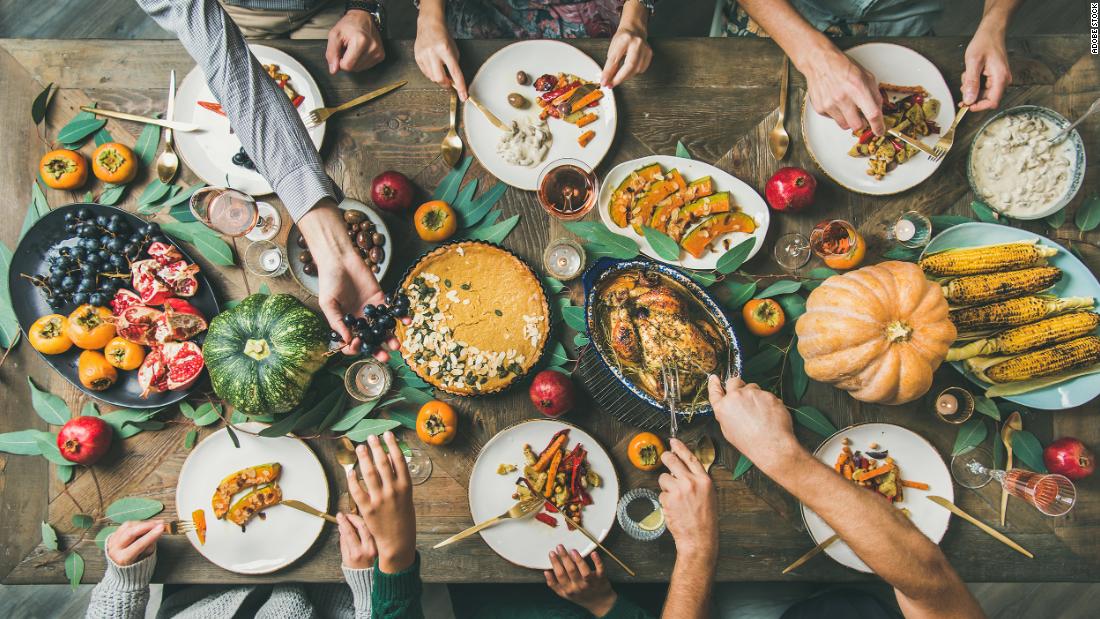 From articles on how to throw a successful Friendsgiving dinner, to an eponymous 2020 Netflix movie, the holiday has come a long way from its casual origins. And though there are no official numbers on how many people celebrate, its rising status in the public consciousness shows just how popular celebrations have become.

Part of the holiday’s rise, Amy Adamczyk, a sociologist and professor at John Jay College of Criminal Justice, speculated, may have to do with changing economics going back to 2007. Many young people may have moved to a big city for work right when the Great Recession hit, potentially leaving them without enough money to return home for Thanksgiving or in jobs that required working on the holiday, she said. Thus, a more informal gathering among friends made more sense.
But it also could be related to delays in when people get married or have children, said Adamczyk, author of “Handing Down the Faith: How Parents Pass Their Religion on to the Next Generation.” As many people get married later in life or delay childbirth, some people may not have an immediate family of their own to celebrate the holiday with.

For those people, going home for Thanksgiving, essentially a long weekend, may not always make sense, particularly if they live further away from their parents and extended family, she said.

That was the case for 36-year-old Meagan Clark in Maryland. Prior to the Covid-19 pandemic, Clark and a group of friends hosted a Friendsgiving dinner regularly for about 10 years. The tradition first started for Clark when she was in college — her parents lived abroad, so she couldn’t really go home to visit. When she moved to Washington, DC after graduation, the trend continued. For her, Friendsgiving is just as important as the traditional, family-centric Thanksgiving.

“I think especially in DC, nobody is really from here, everybody moves here for a job or school or whatever,” Clark told CNN. “I go home maybe once a year at Christmas. My friends are my family here.”

Even when friends moved away, they would still come back for the annual Friendsgiving, Clark said. A former college roommate, who had never actually lived in DC, would take a train down from Philadelphia every year just because the dinner was so much fun.

Even the act of cooking the turkey each year became a thread that tied the group together: One person would cook it for a few years, and then pass the task along to the next person. When it was Clark’s turn, the previous turkey chef came over early “to make sure I didn’t burn the house down,” she said. In 2020, unable to gather for the longstanding dinner, multiple friends reached out to Clark asking for tips on how to cook the bird.

“We always stopped and everybody would go around and say what they were thankful for,” she said. “So it really did feel like a family dinner.”

Friendsgiving is a chance to reinvent a major holiday

Meghana Srikrishna, 25, a master’s student at George Washington University, has done an annual Friendsgiving dinner with friends from high school since 2015. (Note: Srikrishna is a friend of this writer, who does not attend the Friendsgiving celebrations.) Her family never did a traditional Thanksgiving growing up, so the annual get-together has become her main touchstone for the event. It’s a small group of people, but every year she pores over her favorite recipe websites looking for dishes to bring that her friends may not otherwise eat.

“There’s always lots of talk about how family events can be toxic for some people. It’s hard for people to see extended family because of trauma, or whatever it is,” Srikrishna said. “But with things like Friendsgiving, even Galentine’s maybe, we’re all reinventing these ideas of what the holidays need to look like.”
Adamczyk agrees, noting that in her experience, there wasn’t as much of an intention to see friends on holidays in the past like there is now. She told CNN she would typically go to the movies on Thanksgiving, and — though the sitcom “Friends” aired multiple Thanksgiving episodes of the gang getting together throughout the 1990s — the prospect of getting together with friends for dinner never crossed her mind.

Though Adamczyk now celebrates both a Friendsgiving and a Thanksgiving, she’s hesitant to say the rise of a non-familial holiday could signal an increasing importance of chosen family versus blood family.

“Given the constraints of this holiday, people are finding it relatively manageable to replace (Thanksgiving) with (Friendsgiving),” she said, referencing the shorter amount of time off usually linked to the holiday, while adding that many people “are going to do the traditional thing in four weeks, at Christmas.”

Because of the almost guaranteed family time in the winter, Adamcyzk said, it’s easier for people to skip out on family obligations that have traditionally been linked to Thanksgiving, arguing that they’ll make the trip in December instead. But a Friendsgiving version of Christmas, she said, probably wouldn’t be as popular.

Friendsgiving has become a tradition for many

Sara Thompson, a 46-year-old lawyer in Atlanta, is on her 13th straight year of hosting a Friendsgiving, an event that initially began as a way to test out dishes for her law firm’s potluck. Now, friends tell her how excited they are for the annual tradition as early as July.

“People feel like it’s people that they actually want to see,” Thompson said, explaining that no one has to worry about political divides, or dreaded questions about when they’re getting married. “I think that’s why it’s endured and become something we all really look forward to. People who come now don’t have to bring anything, and it’s fine because the most important thing is to see people.”

Though Thompson, like Adamczyk, still does a traditional familial Thanksgiving every year, the annual Friendsgiving allows her to have a social outlet built into her schedule, a relief for someone whose work days can be as long as 14 hours.

She’s also able to explore more creative food options — her husband, for example, took up smoking turkey and brisket for the dinner, a huge feat for someone who didn’t really cook prior. The dinner has also come to symbolize more than just a Thanksgiving replacement or alternate celebration — this year, for example, they’re celebrating a friend who is now cancer-free.

When many Americans imagine Thanksgiving, the holiday looks similar: A long, rectangular table, a turkey centerpiece, blood relatives and perfect side dishes. But Friendsgiving allows space for a more messy, real experience, Srikrishna said, allowing the holiday to be, frankly, whatever attendees want it to be.

“We’ve been primed through movies and TV to know what Thanksgiving is supposed to look like, and I can only speak to my experiences, but I feel like it so rarely looks like a bunch of people cutting into perfect food,” she said. “When I think about (these holidays), I really associate them with my friendships. Not to say I don’t also associate them with my family, but I think it’s really great that we’re prioritizing our friends like that.”

Based on the general public’s growing awareness of Friendsgiving, it seems many people would agree.