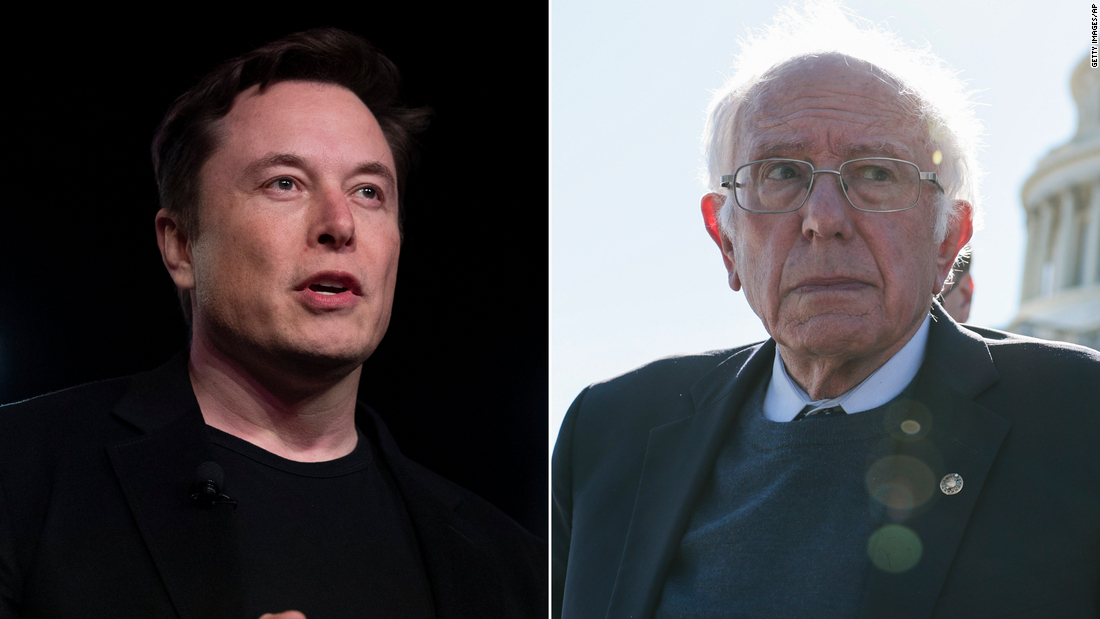 “I keep forgetting you’re still alive,” Musk tweeted Sunday morning, in response to Sanders tweeting that the extremely wealthy should pay their fair share of taxes. CNN Business has reached out to Sanders for comment.
“Want me to sell more stock, Bernie? Just say the words…” Musk tweeted an hour later.

Musk ended the week selling a grand total of $6.9 billion worth of Tesla shares. That only amounted to less than 4% of the shares he holds directly, and less than 3% including all the options he owns to buy additional shares.

Musk certainly qualifies under Sander’s description of “the extremely wealthy” — he’s the world’s richest person, having a net worth of $285 billion, according to Bloomberg’s Billionaires Index.

Musk asked the Twitterverse last week if he should sell 10% of his Tesla holdings to pay taxes — 58% of voters in his poll responded yes.

However, it’s doubtful that the results of the Twitter poll were the main motivation for last week’s stock sale. Musk faces a looming tax bill that will be triggered by his need to exercise 22.9 million options to purchase shares before next August. That bill would be nearly $10 billion at current market prices.
He could also owe state income tax to California, which has a top tax rate of 13.3%. Even though he has moved to Texas, which has no state income tax, he conceded in a recent tweet that he’ll still owe California state income taxes because he still spends a lot of time working in the state.

Taxing extreme wealth is a big part of Sander’s platform. As the chair of the Senate’s budget committee, Sanders has proposed an annual tax on the top 0.1 percent of US households, which he claims will raise about $4.35 trillion over the next decade and cut the wealth of billionaires in half over 15 years. He also wants to implement key enforcement policies on the proposed wealth taxes.

“Whether or not the world’s wealthiest man pays any taxes at all shouldn’t depend on the results of a Twitter poll,” Sen. Ron Wyden of Oregon tweeted in response to Musk’s Twitter poll. “It’s time for the Billionaires Income Tax.”