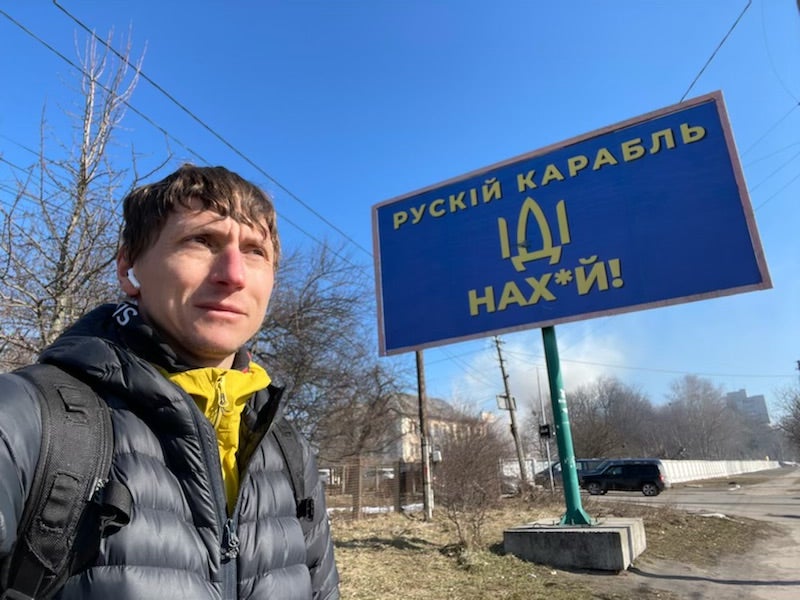 On February 23 I presented the first part of my Ph.D. study, dedicated to ultra-marathon running, at my university. After that, I packed my bags and checked-in online for the flight to Barcelona that was planned for February 24.

I had just finished a very hard training cycle with peak volume of more than 140 miles per week and was ready to start a 6h race at Ultra Running Barcelona on February 27. Prepared to fly to Spain the next day, my girlfriend and I fell asleep.

We woke up at 5 a.m. because of the sound of explosions. We checked news and find out that there was attack on Boryspil airport and a lot of other objects all around Ukraine. The war had started.

Our decision was to get to Zhytomyr – 80 miles from Kyiv. This is my girlfriend’s hometown. Her parents live there and also my car was there. To get to my car to become more mobile, stay together and then make a decision about next steps – was our choice.

The problem was that the way to Zhytomyr already was jammed with traffic. Almost without any movement. Thousands of cars tried to escape in panic. So, we decided to wait a day until first wave of panic would stop. At that time our friends from Irpin (town just near Kyiv) welcomed us to stay the night with them, suggesting that it would be easier to travel from this town in the morning.

Just when we got to our friends’ house, the fight for Hostomel airport, which neighbors on Irpin, started. From February 25 to 26 we spent the night in the basement of a private house. It was a small dusty place where 5 adults, a 5-month-old baby, a dog and a cat slept on the floor. Actually, we did not really sleep because of the explosions that continued all night. In the morning we all got into our friend’s car and left the town.

You feel shaking walls, think that this is the end.

The traffic on the road to Zhytomyr was very hard. It took us about 5 hours to get to the city (usually it’s 3 times faster). When we arrived, we found out that bridge to Kyiv was destroyed so it is not possible anymore to return the same way. Also, we heard news about fights near Kyiv from other sides of the capital of Ukraine.

We decided not to run away and stay in Zhytomyr. This is a big city – it’s in the center of Zhytomyr region, which is borders Belarussia. So, it is not the safest place. But it is a place where I thought I could do something to help fight against enemies. For now, to join Ukrainian army or local defense force you have to have appropriate experience, which I don’t have.

So, me and my girlfriend just started to do what we could. So now we buy and deliver water and snacks to soldiers on block posts, we help with building fortifications and do other volunteer work. It’s not much but it’s important for our victory.

Today Zhytomyr lives under war conditions – there are a lot of block posts, many people in ammunition and with guns. But mostly living here is comfortable. Food shops are working. We can buy most of what we need. There is a deficit with regards to fuel, socks and underwear.

Also, it is forbidden to sell alcohol. Public transport is restricted, but it works. Everything is alright with electricity, phone connection and internet. There is no panic, just preparation to meet Russians if they will try to get there.

As in other big Ukrainian cities, Zhytomyr suffers from Russian bombs and missiles. First time I was really scared when Russian missiles hit residential area just a few hundred meters from our home.

The noise of approaching missiles or jets is terrifying. You feel shaking walls, think that this is the end. Those days Russians killed 4 civilians in the city. Dozens of houses were totally destroyed. The next day a bomb hit the school, then an oil base.

Just when I am writing this essay, I could hear jets and explosions. Now I understand that noise – it is not very close to me, rather another side of the city.

Our news is telling that this was bombing of local factory that produce some stuff for construction. And destroyed apartment building – not military objects at all. No information about victims.

I am trying to stay positive and strong, but sometimes feel helpless. Before the war I was a coach for local running club. I organized group training and wrote training plans for those, who want to run a marathon or trail.

Now it is not an option, so I have lost all my incomes.  I left my home in Kyiv and don`t know if it still stands.

Life became too uncertain. But I don’t think myself as a victim. There are thousands of people in Ukraine who are in more danger than me, who lost much more.

I just wish this war will end soon, we will rebuild our country and I will be able to run another 100 miles.