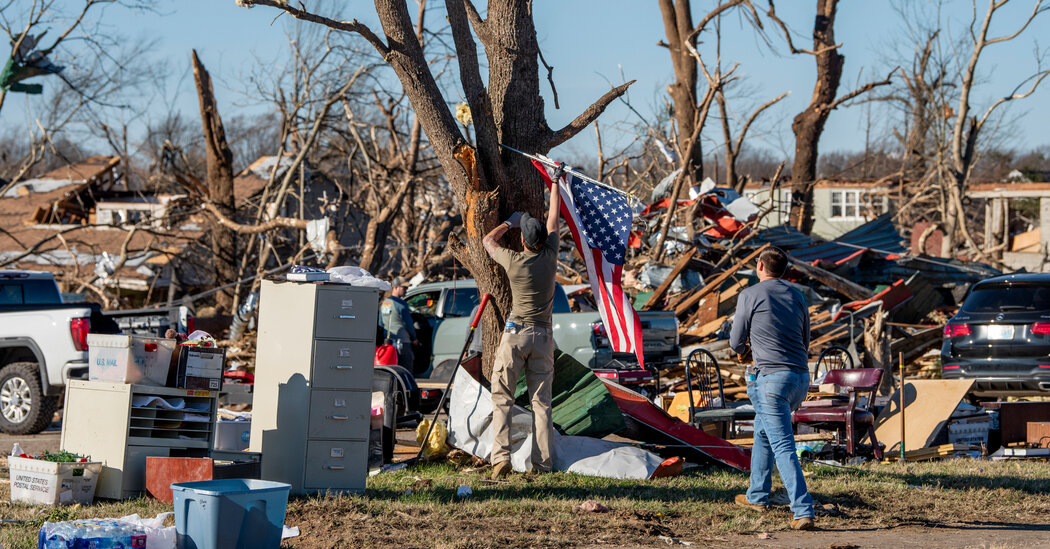 The largest of the tornadoes that ripped through six states and killed at least 90 people will, according to Gov. Andy Beshear of Kentucky, “ultimately be the longest tornado in certainly U.S. history, from the point where it touched down to when it finally picked back up.”

Speaking at a news conference on Sunday afternoon, Mr. Beshear said of the tornado’s more than 220 miles of destruction, “200 of them are in my state, with our people who have suffered from it.”

At least three tornadoes were believed to have hit Kentucky on Friday night, the governor said, before adding that, “I think we now believe many, many more.”

At least 300 National Guard members were deployed in the state, the governor said. They are, he said, “going door-to-door, though many of these communities don’t have doors anymore. They’re going rubble to rubble,” looking for survivors and other victims.

More than $2 million had been donated to help with recovery efforts, the governor said. The first tranche of grants would be given to help cover funeral costs, he said.

“We’re still finding bodies,” Mr. Beshear said. “I mean, we’ve got cadaver dogs in towns that they shouldn’t have to be in.”

Mr. Beshear declined to say how many people were killed as a result of the tornadoes, but said, “We expect there to be a significant death toll.” He later added: “The wreckage is extensive as we continue to try to get through it.”

Scores of people remained unaccounted for on Sunday, but there was dwindling hope of finding them alive as recovery workers across the middle of the country resumed their search efforts.

The tornadoes tore through parts of Arkansas, Illinois, Kentucky, Mississippi, Missouri and Tennessee, said Bill Bunting, the operations chief at the Storm Prediction Center, part of the National Weather Service.

The tornado outbreak killed people who were working the Friday night shifts at a candle factory just outside Mayfield, Ky., where scores are believed to have died, and at an Amazon warehouse in Illinois, where at least six people were killed. On Sunday, officials in Edwardsville, Ill., said there were no more reports of people missing inside the Amazon facility, but search efforts for additional victims continued.

While the destruction was spread throughout western Kentucky, much of the estimated death toll came from the Mayfield Consumer Products candle factory near Mayfield. Officials described an almost unfathomable level of destruction in a single building there, now a knot of concrete and metal strewn with cars and 55-gallon drums leaking corrosive fluids.

Mayfield’s mayor, Kathy Stewart O’Nan, said that she had walked around the city on Sunday, “the morning after this horrid disaster,” and saw that the city government complex and local fire station had been destroyed.

“I don’t think there’s a pane of glass in any vehicle or property that the city owns that isn’t shattered,” Ms. Stewart said. She added: “There was so much rubble. I looked over the city, and, I’ve said it before, it looked like matchsticks. And I did cry.”

The Kentucky governor heaped praise on federal officials for what he said has been a quick and thorough response. A federal state of emergency has been declared, the governor said, adding that it was “rare” for it to have been put into place so “incredibly quickly.”

“I want to thank all of them,” Mr. Beshear said at the news conference. “And starts with the president, who called me three times yesterday alone.”

But the damage extended far beyond Kentucky.

In Tennessee, at least four people were confirmed dead, with the worst damage reported in the northwestern corner of the state. In Arkansas, one person died at a Dollar General store in Leachville, and a 94-year-old man was killed when the tornado slammed into a nursing home in the city of Monette.

And in Missouri, at least two people died: a woman in St. Charles County and a child in Pemiscot County.

Officials in Edwardsville, Ill., a small city across the Mississippi River from St. Louis, said that at least six people had been killed at an Amazon warehouse when a direct hit from a tornado around 8:30 on Friday night caused two of the building’s 40-foot-high concrete walls to collapse.

“We don’t expect that anyone could be surviving,” said James Whiteford, the chief of the Edwardsville Fire Department. The chief said that the tornado had come at the time of a shift change and that it was unclear how many people would have been in the building.