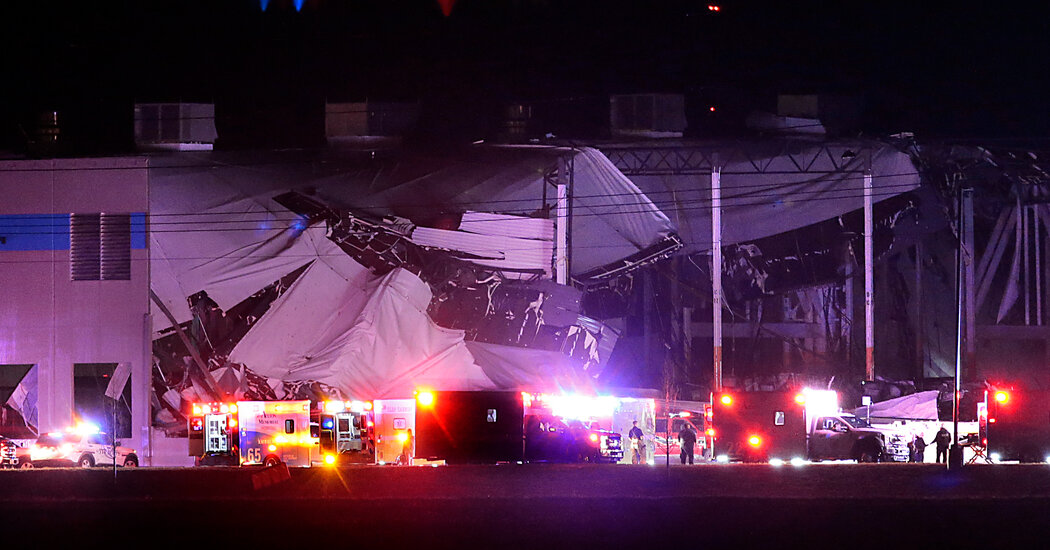 Dozens of people were feared dead and communities across the Midwest and southern United States were left scrambling to assess the damage on Saturday morning after a string of unseasonably powerful storms and tornadoes swept across five states overnight.

Officials said that tornadoes had killed at least one person at an Arkansas nursing home and caused a roof to collapse at an Amazon warehouse in Illinois, leaving workers trapped inside. Kentucky’s governor said that at least 50 had been killed in a tornado’s path of over 200 miles, and that the state’s death toll was likely to increase to more than 70 in the coming hours.

“Daybreak is going to bring more tough news,” Gov. Andy Beshear said in a news briefing. “It has been one of the toughest nights in Kentucky history,” he added. “Some areas have been hit in ways that are hard to put into words.”

Mr. Bunting said the tornadoes were part of a weather system that was wreaking havoc in many parts of the country, causing substantial snowfall across parts of the upper Midwest and western Great Lakes.

A tornado hit an Arkansas nursing home, Monette Manor in the city of Monette, about 8:15 p.m. on Friday, prompting a large response from the police and emergency workers in the area, according to Marvin Day, the Craighead County judge.

Search-and-rescue workers found one person who had died and five who had been seriously injured, Mr. Day said, correcting an earlier report that at least two people had been killed. Mr. Day said that other residential buildings in the area had also been damaged.

Police officers and emergency workers also responded to reports that the roof of an Amazon warehouse had collapsed in Edwardsville, Ill.

The Edwardsville Police Department said in a brief statement early Saturday that an Amazon warehouse had suffered a “partial building collapse” after a severe weather event occurred on the city’s west end at 8:33 p.m. on Friday. A search-and-rescue operation was udnerway, the statement said.

A dispatcher who answered the phone at the police department on Saturday morning said that he had no comment.

UPDATE: We’ve learned about 40 Amazon employees were taken to the Pontoon Beach Police Dept. We spoke to a man who was at the warehouse – he described seeing people buried under debris and cars tossed into a retention pond. https://t.co/LhFhs3fKUW

Herbert Simmons, the director of the St. Clair County Emergency Management Agency, said late Friday that local officials were responding to an “active scene” at the warehouse. “Right now, our concern is trying to get people who are trapped,” he said, adding that he was not sure how many people might be in the building.

A BBC reporter at the scene said around the same time that about 100 people were believed to have been inside.

Gov. J.B. Pritzker of Illinois said on Twitter that the State Police and emergency management officials were working with local officials and that he would continue monitoring the situation.

Amazon did not immediately respond to a request for comment.

The damage in Arkansas came after a severe thunderstorm produced a tornado that was tearing through the region, according to the National Weather Service. As of 9:17 p.m., the storm was near Trumann, Ark., and moving northeast at 55 miles per hour, bringing with it a tornado and quarter-sized hail, the Weather Service said.

“Remember, there are people affected by all these tornadoes,” Craig Ceecee, a meteorologist and a graduate student at Mississippi State University, said on Twitter late Friday as he tracked tornadoes across Kentucky. “Communities being hit hard. And we won’t know how bad it is until morning. We have to think and pray for those being affected.”

The 21 best setting powders for all skin types, according to makeup artists | CNN Underscored