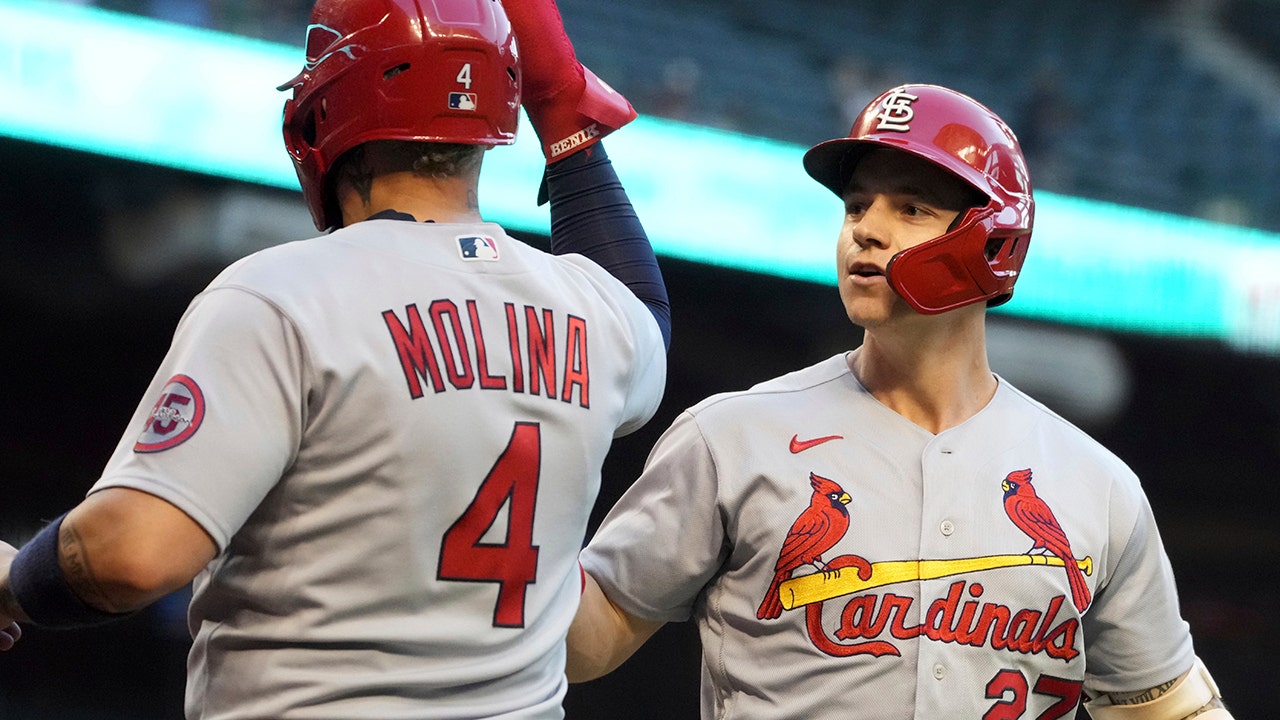 Yadier Molina was doing what the 38-year-old catcher has done for nearly two decades, throwing his body around behind the plate, blocking pitches from the Cardinals’ stable full of hard-throwing relievers.

Then came the 10th inning, and the St. Louis star still had the energy to rip a game-winning hit and lead the Cardinals to a 5-4 win Thursday night over the Arizona Diamondbacks, who have lost 11 straight games.

“He’s Iron Man back there,” Cardinals outfielder Tyler O’Neill said of Molina. “He’s a walking legend. Everything he does is noticed by the boys in the locker room.”

Molina turned on a sinker from Stefan Crichton (0-4) for his one-out double, just out of the reach of a diving Eduardo Escobar. The hit scored Paul Goldschmidt, who started the inning on second base. Daniel Ponce de Leon pitched a scoreless 10th for his first save of the season.

The Cardinals won despite blowing a 4-0 lead. Carlos Martinez took a no-hitter into the seventh inning and O’Neill hit a two-run homer in his return from the injured list.

The Diamondbacks clawed their way back with a big seventh. The first six batters reached base — punctuated by Pavin Smith’s two-run double — and they cut the deficit to 4-3. Smith came up big again in the eighth, driving a tying double into the left-center gap that scored Ketel Marte.

Martinez was brilliant through six innings but ran into trouble in the seventh, allowing three straight hits and getting pulled from the game after David Peralta’s RBI double. He retired the first nine batters he faced, including six strikeouts. He didn’t allow a baserunner until Josh Rojas led off the fourth with a walk.

He struck out six and allowed three earned runs.

Génesis Cabrera relieved Martinez but allowed all three batters he faced to reach base, including Smith’s two-run double, which cut the Cardinals’ lead to 4-3. Ryan Helsley was able to keep the lead despite entering the game in a no-out, bases-loaded jam, pumping 99 mph fastballs past Carson Kelly and Andy Young before Rojas hit a harmless groundout to second base.

“That was huge by Helsley, pulled a Houdini,” Cardinals manager Mike Shildt said.

After Smith tied the game in the eighth and it looked like a Diamondbacks win might finally be on the horizon. Instead, Arizona fell to 18-33, which is the worst record in the National League.

O’Neill crushed a 451-foot homer to center field in his first at-bat since a fracture in his left middle finger kept him out of the lineup for nearly two weeks. The ball bounced off the scoreboard in center, which is high above the 413-foot sign.

Arizona’s Jon Duplantier was moved into a starting role on Thursday after Matt Peacock was scratched because of non-COVID-19 illness. It was the 26-year-old’s first appearance in the big leagues since 2019, when he made 15 appearances, including three starts.

The right-hander got off to a good start, striking out leadoff hitter Tommy Edman on three pitches. But he ran into trouble in the second, giving up O’Neill’s long homer and walking Goldschmidt with the bases loaded. He gave up four earned runs over 4 2/3 innings.

Alex Reyes (3-1) got the win with a scoreless ninth.

Duplantier was the 11th D-backs pitcher to start on the mound in 51 games this season. Three of the team’s main starters — Zac Gallen, Luke Weaver and Taylor Widener — are on the injured list. Only Madison Bumgarner and Merrill Kelly have taken every turn in the rotation this season.

Diamondbacks: Weaver (strained shoulder) was moved to the 60-day injured list. Manager Torey Lovullo said on Wednesday that Weaver wouldn’t throw for at least four weeks and would then be re-evaluated. … RHP Corbin Martin was optioned to Triple-A Reno and LHP Ryan Buchter was called up to replace him on the roster.