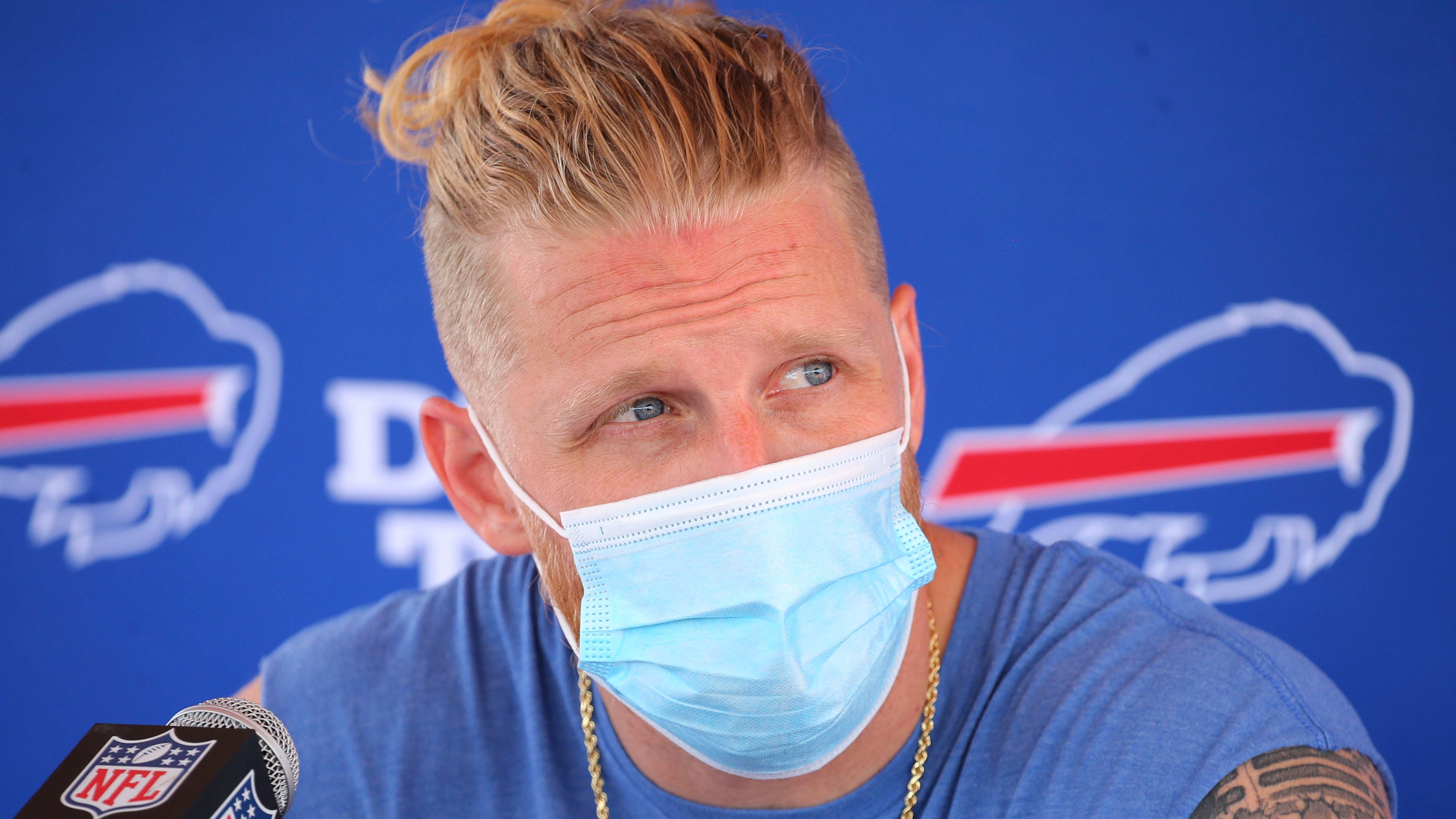 The NFL’s COVID-19 protocols, rewritten to protect the 2021 season, is showing holes now. And some hypocrisy. And some lack of forethought.

And we’re not even out of the preseason yet.

That policy, which is considerably different than it was last season, has already:

Same thing happened in Miami, by the way, when vaccinated co-offensive coordinator and tight ends coach George Godsey tested positive and knocked unvaccinated Adam Shaheen out of practice, although the tight end never tested positive nor got sick.

So the healthy unvaccinated guys must remain away from the team for five days. But the ailing, vaccinated trainer or coach is allowed back in the facility in two days, if they test negative.

This is when amateur social media medical experts will predictably charge to the defense of COVID vaccinations when no defense is necessary. Because this isn’t a takedown of vaccines, but rather the knee-jerk thinking that paints unvaccinated people as the villains at the root of every COVID problem and vaccines as the unquestionable solution.

So let’s address some facts:

The number of unvaccinated active NFL players who have died of COVID-19 is … zero.

The number of games the NFL has been forced to cancel because of unvaccinated players is…zero.

The league’s latest COVID-19 protocols were largely negotiated between the NFL and the NFL Players Association when COVID’s initial strain and perhaps even the Alpha variant were present in the United States. And the Centers for Disease Controls and Prevention (CDC) assure everyone vaccines are generally effective against that early strain and variant.

But we’re well down the road on COVID strains, according to scientists. And according to the CDC website, “[D]ata suggest lower (vaccine) effectiveness against confirmed infection and symptomatic disease caused by the Beta, Gamma, and Delta variants compared with the ancestral strain and Alpha variant.

“Ongoing monitoring of vaccine effectiveness against variants is needed,” the CDC concluded.

In other words, the current vaccines are not as effective against the new strains, and the CDC is going back to study the tape, so to speak, to see exactly how the vaccines are performing.

But the NFL, which insists it will remain flexible on its COVID protocols as it was in 2020, is operating as if the vaccines are kicking the Delta variant’s behind.

“The vaccines continue to provide strong immunity against variants of the coronavirus, including the Delta variant,” the league said in a memo sent to all clubs on July 22 amid a rise in cases.

The NFL’s 2021 protocols were designed to accomplish two goals:

— Preserve the NFL season at any cost.

— Convince every player, coach and staffer on the league’s 32 clubs to get vaccinated because having everyone vaccinated, the league trusts, will increase the chances the season will continue uninterrupted.

To, shall we say, motivate its employees and the journalists covering the league to get vaccinated, the NFL has established protocols that treat unvaccinated people as second-class citizens while giving vaccinated people greater freedoms and privileges, regardless of symptoms or lack of timely testing results.

The protocols force unvaccinated players to test for COVID every day while vaccinated ones have to test only once every two weeks.

Unvaccinated players have to wear masks inside their team facility, while vaccinated ones don’t.

And unvaccinated players who don’t abide by the higher threshold for COVID protocols that applies only to them are subject to an onerous fine schedule.

The league and NFL Players Association have also agreed — with docile compliance from the Pro Football Writers Association — that unvaccinated reporters have to wear masks outside when they are on club facility grounds, cannot participate in press conferences, cannot enter press boxes and cannot ask questions on Zoom calls.

Even if they are on a laptop hundreds of miles away.

Vaccinated journalists, after testing negative once every two weeks, are not subject to the handicaps — even if they spend the night before in a packed bar, or at a concert, or sitting elbow-to-elbow on a plane full of strangers.

On Tuesday, the NFL sent clubs another memo saying no independent reporters, vaccinated or not, will be allowed in locker rooms this year. That’s not optimal for people like me, but at least it treats everyone the same.

Before many training camps opened, the NFL sent its clubs a different memo saying if a game “cannot be rescheduled within the current 18-week schedule and is cancelled due to a Covid outbreak among unvaccinated players on one of the competing teams, the club with the outbreak will forfeit.”

The memo doesn’t mention what the league will do if the outbreak is among vaccinated players, apparently because it doesn’t see that as likely.

But if a game is canceled because of a COVID outbreak among vaccinated players, then the league will “attempt to minimize the competitive and economic burden on both participating teams.”

Fair? Of course not.

The league bought into the “epidemic of the unvaccinated” idea introduced to the entire country by the Narrative Industrial Complex.

The problem is, two weeks after that memo was delivered and one week after training camps opened, the NFLPA delivered its testing metrics for the first week of those camps.

And according to that memo, 65 players and staff tested positive for COVID-19, and 32 of those people, or 49 percent, were fully vaccinated.

The NFLPA memo made the point that one week into training camps, two teams (the Falcons and Dolphins) had already suffered a COVID outbreak. But last year when there were no vaccines, it wasn’t until the third week of camps that an outbreak hit a team.

So much for the “epidemic of the unvaccinated” applying to the NFL.

The NFLPA requested the league adjust its testing protocols to include vaccinated individuals among those tested daily, but so far, the NFL has declined to go that route.

The protocols remain unchanged even as they do obvious harm to teams for almost no logical reason.

In New England, for example, Cam Newton and rookie first-round pick Mac Jones are locked in something of a quarterback duel.

But on Monday, the Patriots announced Newton would have to miss five days, including two practice days and a dual-practice with the New York Giants on Wednesday, because he had fallen out of the COVID protocol for an unvaccinated player.

“He received daily Covid tests, which were all negative,” the Patriots said in a statement. “Due to a misunderstanding about tests conducted away from NFL facilities, and as required by the NFL-NFLPA protocols, Cam will be subject to the five-day entry cadence process before returning to the facility.”

So even though Newton did nothing wrong, the NFL-NFLPA protocols opened the door for Jones in New England’s quarterback competition.

And that’s not just me saying that. Patriots coach Bill Belichick was asked Tuesday whether Newton being forced to miss practice was a competitive disadvantage to him.

“Yeah. Of course,” Belichick said. “If you couldn’t gain anything by practicing, then why would we practice?”

The Providence Journal reported Jones got 31 passes in team drills on Monday, or about twice as many as he normally would, as a result of Newton’s absence. That’s a great opportunity for one of the quarterbacks locked in the competition, right, coach?

“It is,” Belichick said.

But you know what all the coverage has barely mentioned? Newton had COVID last year, and studies suggest people who have been infected with SARS-CoV-2 will probably make antibodies against the virus for most of their lives.

And, again, Cam Newton did not test positive. He’s not sick. Nor is he contagious.

His grand crime under the NFL-NFLPA protocol is merely being unvaccinated.

That brings me to this: You know how fans get angry when NFL officials make mistakes and affect the outcome of plays and sometimes even games?

Where’s the anger that the NFL’s uneven COVID protocols — stacked against asymptomatic players who have tested negative and are not sick — could already be affecting outcomes?