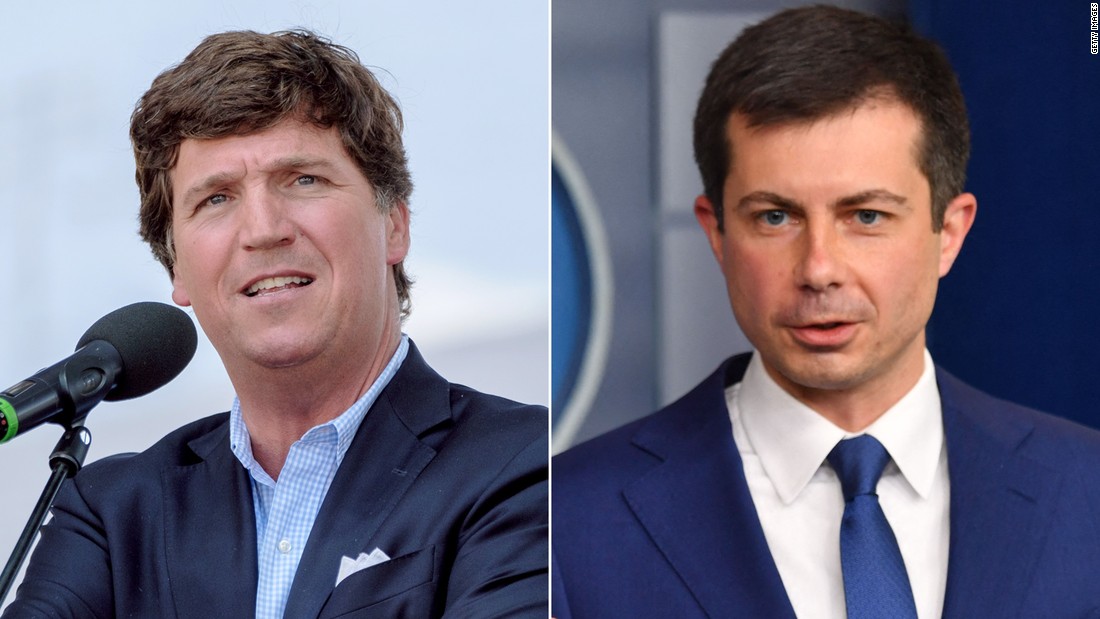 The Fox News anchor mocked Transportation Secretary Pete Buttigieg on Thursday for taking family leave to look after his newborn twins, saying that Buttigieg was: “Trying to figure out how to breastfeed. No word on how that went.” Buttigieg snapped back, pointing out Friday he has been “available 24/7 on issues that can’t wait” and arguing Sunday it is time for the US to join “pretty much every other country in the world” on paid family leave.
Carlson was perhaps the most insulting of the right-wing commentators who taunted Buttigieg for taking time off with his husband and new children, but he was far from alone. In addition to the obvious homophobia in some of these attacks, their toxic perpetuation of the antiquated idea time to bond with and care for one’s children is something “only” women should do only amplifies how right Buttigieg is that the United States remains pitifully out of step with the rest of the world on this issue.
In 2021, the United States is the only wealthy country in the world that does not offer a national paid parental leave program. For years, according to the Pew Research Center, a strong majority of Americans have supported access to paid parental and caregiving leave, with support on both sides of the political aisle.
As the situation stands now, it’s largely up to private businesses to decide independently whether to offer paid leave, reinforcing a system that leaves most of the workforce behind, with minorities — who remain more likely to hold jobs in agriculture and lower-paying services — at a particular disadvantage. The repercussions of having and raising children without adequate practical and financial support are pervasive and echo throughout employees’ lives.
Asked whether paid family leave will remain in President Joe Biden’s $3.5 billion Build Back Better agenda, Buttigieg said it remains “in the president’s vision.” Under Biden’s proposal, funding for paid leave would come from raising the income tax rate for the top-earning 1% of Americans from 37% to 39.6%, plus increases in capital gains and dividend tax rates for those earning over $1 million a year. For the sake of the American workforce, realizing that vision should be a major priority.
According to a Pew survey from October 2020 among employed parents who were working from home, mothers were more likely than fathers to say they had a lot of child care responsibilities during work hours (36% vs. 16%). The disparity was not peculiar to the pandemic. In 2019, roughly eight in 10 mothers in opposite-sex partnerships said they did more than their spouse or partner when it came to managing their children’s schedules and activities. Just over six in 10 fathers agreed.
The perception of child care as “women’s work” sees moms pay a greater price, both in the family and in their careers. In 2020, among those working from home with child care responsibilities, mothers were more likely than fathers to say they’d needed to reduce their work hours (50% vs. 30%), and they had been treated as though they were not committed to their work (22% vs. 13%), or been passed over for a promotion (13% vs. 3%). This imbalance reinforces a sexist, outmoded precedent set at birth, when mothers are more likely than fathers to be allowed to stay home. It falsely implies that fathers’ input is redundant, and that women are better suited to the underpaid, under-supported work of child-rearing.
As of this year, according to McKinsey’s 2021 Women in the Workplace report, one in three American women are considering downshifting their careers, or quitting the workforce altogether — up from one in four in 2020 — after bearing the brunt of the social and economic fallout of the pandemic. Moms, who take on not only more child care, but also more housework, cooking and emotional labor at home, are suffering burnout — a serious mental health condition — as a result. McKinsey research also shows mothers’ earning capacity increases with every month a father takes on paternity leave — which, in the long term, benefits the financial wellbeing of a whole family.

Carlson’s sad implication “breastfeeding” is the only significant task for people who have children — an especially depressing take from a father of four — does a disservice to all parents, of all genders and sexualities.

When men do take parental leave, research shows they see it as an overwhelmingly positive experience, reducing the professional risk for both them and their partner, increasing their bond with their child, and strengthening their relationship. As part of a gay couple, Buttigieg’s example in taking leave is particularly significant.
Based on data from 2016 cited by the Williams Institute at the UCLA School of Law, an estimated 114,000 same-sex couples were raising children in 2016. As of 2016, many top US companies still did not offer paid parental leave to non-salaried workers, the non-birth parent or adoptive parents. And same-sex couples are seven times more likely to be raising an adopted or foster child than different-sex parents.

Young children need care whether they are adopted or not, and whatever their parents’ sexual identity, parity in earning capacity and the burden of home responsibilities should be possible in all relationships.

Men who have taken paternity leave say it has increased their dedication to their employers, and made them more fulfilled at home, but note normalizing it in workplaces that already allow it is crucial to change the prevailing mother-focused childcare culture. By that measure, Buttigieg’s only misstep in taking time at home with his new babies was in not shouting louder about it when he did.