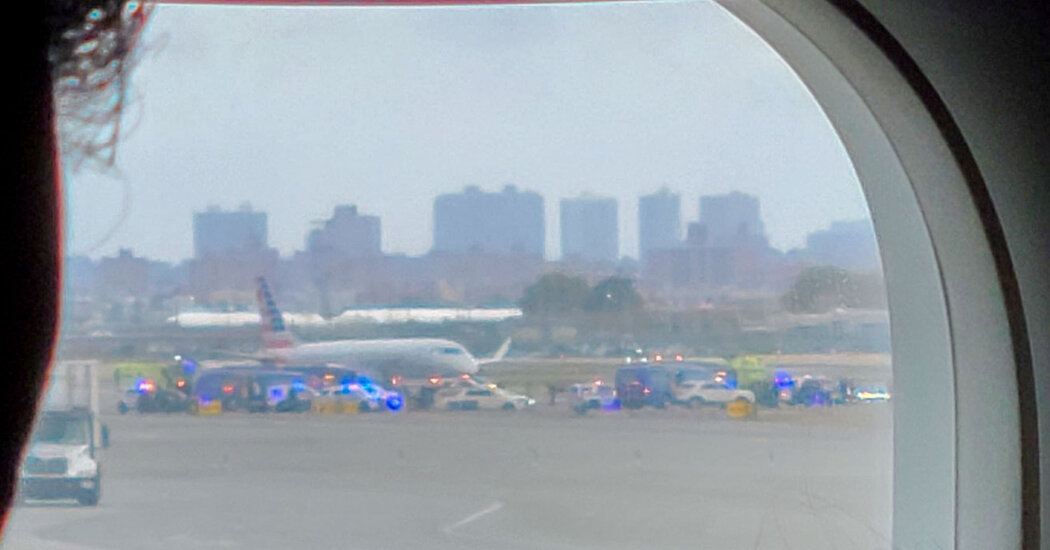 Firefighters and police personnel converged on a plane that had traveled from Indianapolis and landed at La Guardia Airport on Saturday afternoon after a “security incident,” according to a Federal Aviation Administration spokesman.

The plane landed shortly after 3 p.m., and all the passengers got off board safely, said the spokesman, Steve Kulm.

The flight, a Republic Airways aircraft operating as American Flight 4817, declared an emergency and landed “in response to passenger behavior near the end of the flight,” a Republic spokesman, Jon Austin, said.

“Our crew responded to the situation in accordance with our procedures and with professionalism and a concern for safety of all aboard,” he said. “Law enforcement and first responders met the aircraft, and the passenger involved in the incident has been taken into custody.”

A passenger aboard the flight described a scene of pandemonium after the plane landed. Fawad Khuja, who was seated in the fourth row, said that the plane had braked soon after it touched down and that passengers behind him had started yelling to get off the plane immediately.

He heard people saying that a man had “a suspicious device.”

“People were panicking and getting shoved to the ground,” he said. “The slide opened, and I jumped out. People were sliding and rolling down to the floor. It was crazy.”

Mr. Khuja, 19, said that after he had gotten off the plane, he saw emergency responders throw a man to the ground and take him into custody.

“The lady next to him was talking to him the whole time and telling him not to do it,” he said. “I think the guy had gone crazy.”

It was unclear exactly how many people had been aboard the plane. American Airlines, Republic Airways and the Port Authority of New York and New Jersey reported that it had carried between 76 and 78 passengers and four to six crew members. There were no injuries reported.

The person who was taken into custody was not identified, but a Port Authority spokesman said the man’s “suspicious and erratic behavior” had caused other passengers to alert the pilot.

“All passengers were safely removed,” the spokesman, Thomas A. Topousis, said. “Several who were closest to the passenger with erratic behavior were interviewed.”

He said the person at the center of the episode was being “detained for questioning” by the police.

A video taken on the ground showed emergency responders surrounding a man who was on his stomach as passengers stood nearby. In another video, evacuated passengers are told to “step back” and give responders and the man space.

The U.S. Department of Homeland Security and the F.B.I. did not respond to emails or phone calls on Saturday afternoon.

The flight took off from Indianapolis International Airport around 1 p.m., according to data from FlightAware.