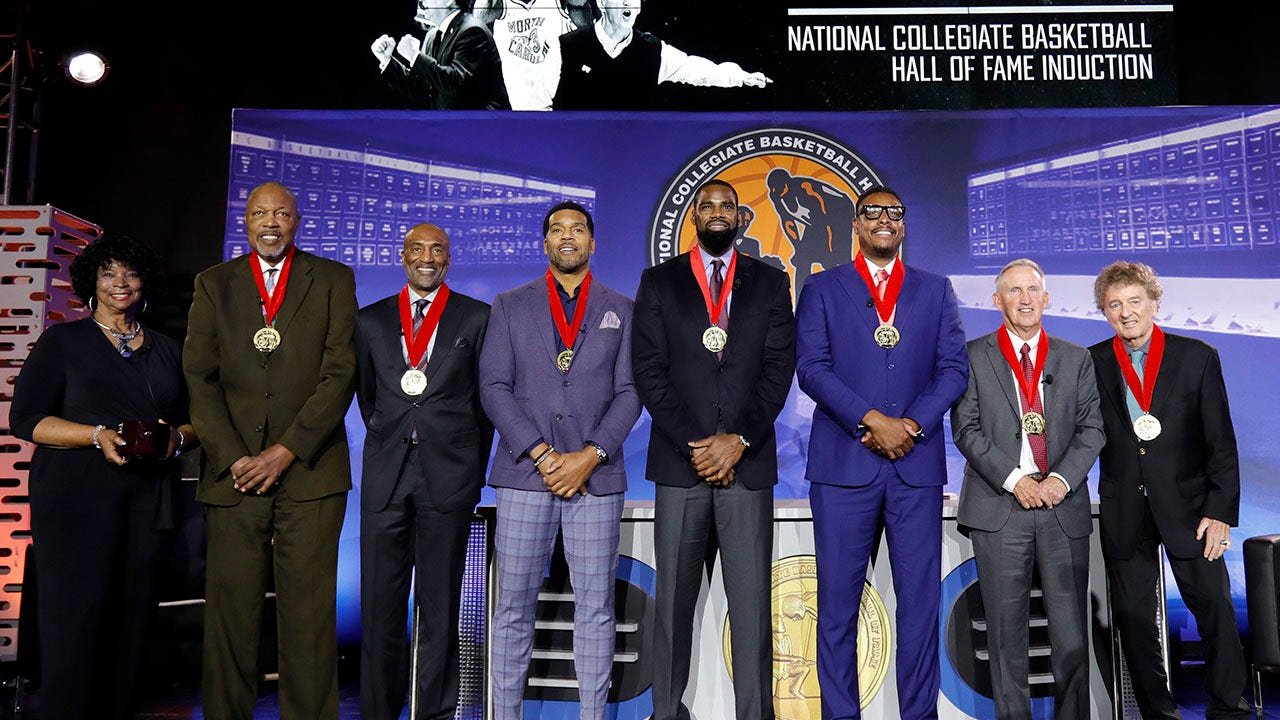 Paul Pierce and Antawn Jamison forged a lasting friendship when they arrived in St. Louis in April 1995 for the McDonald’s All-American Game, the traditional showcase for the best high school basketball players in the country.

It lasted through their college years, when Pierce starred at Kansas and Jamison for fellow blueblood North Carolina. And it endured through long NBA careers, Pierce’s spent mostly with Boston and Jamison having bounced around the league.

They rekindled it this weekend, too, when Pierce and Jamison led a seven-man class that included Hersey Hawkins and the late Len Bias that was inducted into the National College Basketball Hall of Fame.

“We played each other in the NBA for 16 years,” Jamison said. “There’s always been a mutual respect for each other, through all the battles we had. We formed a friendship and seeing him in the All-Star Game or just coming to Los Angeles, when we were in the same facility or same restaurant, we always showed respect for each other.

“For me to go into the Hall of Fame with him,” Jamison said, “it just made it more special.”

Pierce and Jamison were hardly the only stars that emerged from that famous McDonald’s All-American Game. Kevin Garnett skipped college for NBA greatness, while Vince Carter, Stephon Marbury, Chauncey Billups, Ron Mercer and Shareef Abdur-Rahim were among those who parlayed exceptional college careers into standout professional ones.

“It’s really been surreal knowing that I’ve been able to leave my mark on the game of basketball at pretty much every level,” Pierce said. “As a kid growing up, I don’t know how much you think about it. You just work as hard as you can and at the end of the day, you see where you end up. But to be honored at the NBA level and the college level, it’s just a testament to the hard work that you put in.”

While Pierce and Jamison chased national titles for traditional college powers, Hawkins took a decidedly different path. The self-described “momma’s boy” headed a few hours south to Peoria, where after playing center for Chicago’s Westinghouse High School he was given the opportunity to play shooting guard at Bradley.

Hawkins wound up starting all 125 games he played for the Braves, scoring 3,008 points and leading the nation with an eye-popping 36.3 points per game in 1987-88. He was also a member of the 1988 Olympic team that captured the bronze medal before a distinguished NBA career that spanned 13 seasons.

Bias is remembered as much for the tragic circumstances surrounding his death as his playing career, where he was a four-year star for Maryland in the mid-1980s. He was picked second overall by the Celtics in the 1986 draft, then returned home and attended an off-campus party where he died of cardiac arrhythmia induced by a cocaine overdose.

“When you talk about legacy, I think about how he died,” said his mother, Lonise Bias, “and one of the things I tell young people, when you have a dream and you’re trying to reach the top, you have to be cognizant of who is in your realm of influence and being careful about the decisions you make. I try to impress upon them the importance of knowing they have to take good care of themselves, and self-preservation is the first law of nature.”

Also inducted were longtime Belmont coach Rick Byrd, who won more than 800 games before retiring in 2019; Tom Penders, who led Fordham to the NIT and Texas, Houston, Rhode Island and George Washington to the NCAA Tournament; and David Greenwood, a two-time Pac-10 player of the year for UCLA.

The class was honored during a gala weekend that included the Hall of Fame Classic on Monday night at T-Mobile Center, where No. 14 Illinois played Cincinnati and No. 13 Arkansas faced Kansas State in the semifinals.

“Any time you can call yourself a Hall of Famer, it speaks volumes to all the people that had a piece of that,” Jamison said, “from the teachers to the parents, but most important for me coach (Bill) Guthridge, coach (Dean) Smith, my teammates at the University of North Carolina. It’s been a privilege to be here with these inductees.