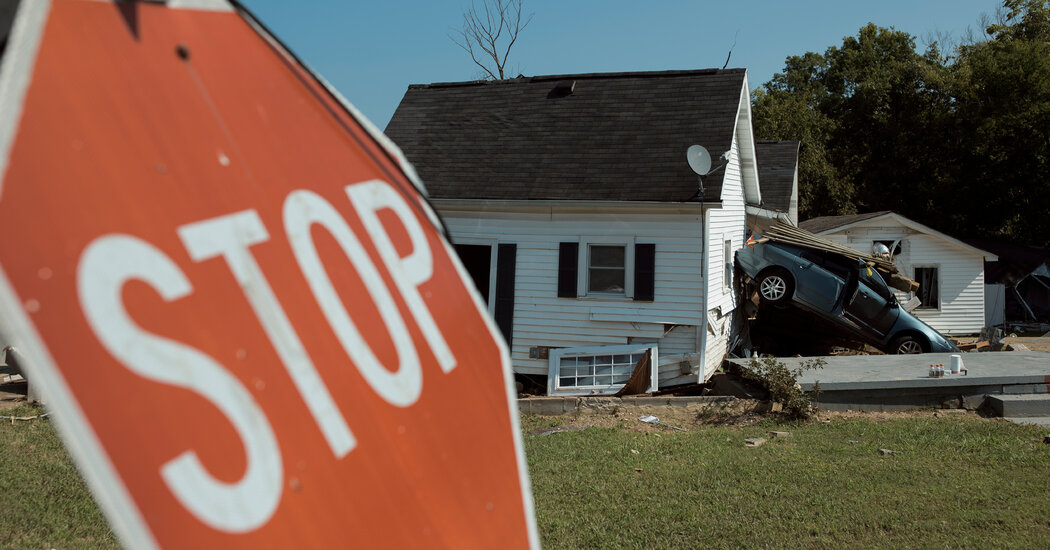 The search teams from across Tennessee that have descended on Humphreys County were pushing forward with urgency on Tuesday to find those whose whereabouts remained unknown after devastating weekend flooding.

Eighteen people have been confirmed dead and three others remained missing, officials said, in catastrophic flash flooding that climate scientists warned will become only more common.

The number of fatalities and missing people has fluctuated since the storm on Saturday. Previously, officials had reported more than 18 fatalities. On Tuesday they explained that some people had, in fact, died of natural causes, unconnected to the flooding.

Sheriff Davis estimated that 125 homes were completely destroyed by the floods and hundreds more were damaged. “We have an extremely long road to go in all of this,” he said.

In Waverly, where the storm damage was centered, the National Guard closed a main thoroughfare — East Main Street — to all traffic except for residents and those providing assistance. “Just trying to stop all the sightseers we’ve got coming through town to look at the damage,” said Grey Collier, a spokeswoman for the Humphreys County Emergency Management Agency.

Highway 70, between the communities of Waverly and nearby McEwen, is also shut down through Friday as work crews try to repair a section that washed out.

Officials on Tuesday urged county residents to consider getting vaccines: tetanus if they had been in flood water, and hepatitis A if they were feeling gastrointestinal symptoms. Both were available at local churches.

Chief Grant Gillespie of the Waverly Department of Public Safety told reporters that crews were employing heavy equipment to chew through mountains of debris where they feared that people might still be trapped.

“That’s a painstaking process,” he said.

The flooding struck a rural area of rivers, creeks and rolling woods in and around Humphreys County, about a 90-minute drive west of Nashville. Up to 17 inches of rain fell on Saturday, shattering the state’s 24-hour record by more than three inches.

One reason the flood was so deadly is that such smaller-scale storms can be trickier to forecast than large weather systems like hurricanes, which are tracked in part by radar and satellite data. Any heavy rainfall, which produces heat, can cause the forecasting models to perform poorly.

“It’s sort of a worst-case scenario because it’s a small weather system that happens and develops quickly,” said Gary Lackmann, a professor of atmospheric science at North Carolina State University. “For these kinds of events, it’s going to be really difficult to get much lead time or forecast warning.”

Beyond the human toll, the physical devastation has been nearly impossible to comprehend. Entire neighborhoods were shredded. Some homes that were still intact were filled with mud and the rancid stench the water left behind.

In Waverly, anguish rippled through the closely knit community of about 4,100 people.

Jaquita Buchanan said her 68-year-old stepfather drove her mother away from the area early Saturday morning and then returned to Waverly to try to save his neighbor.

“But he got swept away,” Ms. Buchanan said. “He died trying to help.”

On Monday, she walked through her parents’ house to survey the damage. “It was like a tornado had swept through,” Ms. Buchanan said. The ceiling was stained by brown water, and every inch of the house was a soaked mess.

Beside her stepfather’s bed, stuck in two inches of mud, she found his Bible.

“It was muddied and tattered,” she said. “Just like everything else.”

Chris Pasquale spoke with relief on Tuesday about the rescuers on a jet ski who had saved his mother and 90-year-old grandmother after their home on East Acres Avenue filled with water over the weekend.

“The fridge was floating up by my grandmother’s head,” Mr. Pasquale said. “She was holding onto a table leg. All the while, a roof rafter came rushing through the house.”

The women managed to flag the rescuers, who got his grandmother to higher ground and then returned to save his mother. “The house is a total loss,” he said, “but they’re safe.”

Carlos and Brittany McDaniels said they woke up to a phone call from a friend on Saturday morning warning them about the flooding. They looked out the window and could already see the water “gushing” through the woods behind their apartment heading toward them.

“That phone call saved us by minutes or even seconds,” Mr. McDaniels said.

Ms. McDonald woke their son, 10, and daughter, 13, and the family raced into their car. As they drove away, they had no destination in mind — hoping just to get away from the water.

The family returned to their home on Saturday night. There was a brownish-yellow stain line about five feet tall, marking how high the water had risen inside the house. Everything was covered in mud, “like someone threw a mud party,” Ms. McDaniels said.

The authorities have told them that their apartment is uninhabitable and that their home, as well as others in the area, will be torn down. They have been staying on air mattresses and cots at Waverly First Baptist Church since Saturday, along with dozens of others who were displaced by the flood. Mr. McDaniels said that he and his son receive disability checks, but this month, he does not know where they will be mailed.

Terri Owen recalled standing on her toes amid the storm on Saturday, struggling to keep her head above the rising water. She could see the woman across the street clinging to a pillar on her front porch, her cries for help punctuated by piercing screams. Two days later, the woman’s voice was still in her head.

“We can’t help you!” Ms. Owen remembered shouting back.

The water was furious. Stoves, refrigerators and cars whipped by. The pillar came loose, Ms. Owen said, and the screaming intensified. The entire house was swooped off its moorings and carried down the block. The woman died, and so did her adult son.

“God had no more favor on me than the woman who lost her life,” Ms. Owen said, pulling down her sunglasses to wipe her eyes as she sat on her friend’s muddy front porch. “I was just in a different place.”