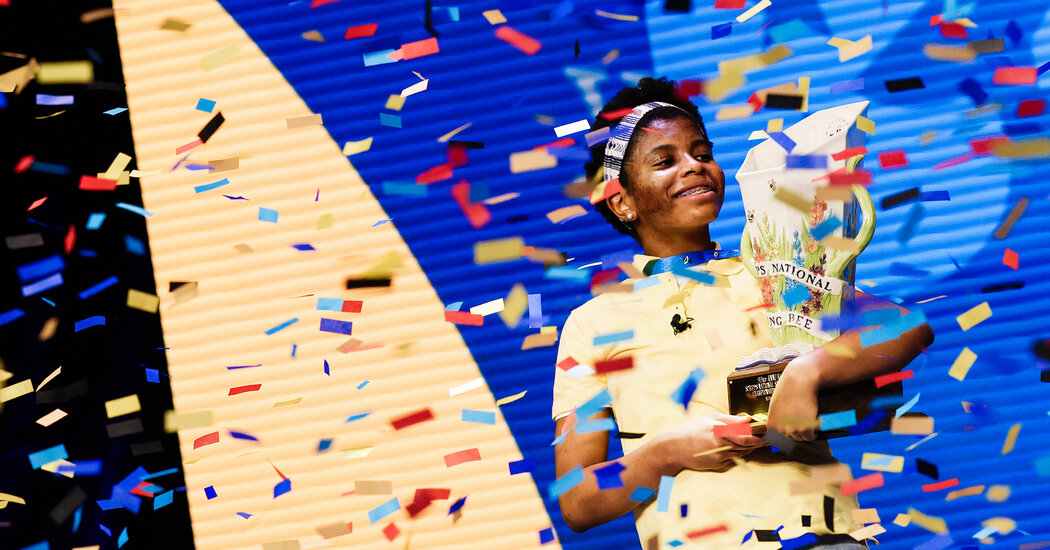 The last few words were rattled off in a swift spelling duel, with only two finalists still on the stage, Chaitra Thummala and Zaila Avant-garde.

First was fewtrils (things of little value), which Chaitra, a 12-year-old who just finished sixth grade in San Francisco, got right. Then retain (a chemical isolated especially from pine tar, rosin oil and various fossil resins but usually prepared from abietic acid), which Zaila got right. And finally neroli oil (a fragrant pale yellow essential oil obtained from flowers chiefly of the sour orange and used especially in cologne and as a flavoring).

Which Chaitra got wrong, exchanging the O in “neroli” for an E.

That gave Zaila, 14, a chance to win it all with one more correct word, which would make her the first Black American student to win the Scripps National Spelling Bee in almost a century of contests. She received the word murraya (a genus of tropical Asiatic and Australian trees having pinnate leaves and flowers with imbricated petals).

Throughout the competition, she appeared to know nearly every word and its origins, smiling each time Jacques A. Bailly, the pronouncer, gave her a new challenge. At first, she seemed flummoxed by murraya, grimacing a little when Dr. Bailly gave her the word.

“Does this word contain like the English word murray, which would be the name of a comedian?” Zaila asked, referring to the actor Bill Murray and drawing laughs from the pronouncer and the judges.

She began to spell it, stopped herself, and asked for the language of origin.

As with so many words before, she needed almost no time to solve its structure and spell it.

“That is correct,” said a judge, Mary Brooks, as Zaila held her head in her hands and jumped in the air.

When the confetti burst around her, she jumped back, surprised, then spun around.

“It’s super exciting to win because now I get to get a nice trophy, which is the best part of any win,” she told an interviewer on ESPN.

Zaila attributed her win, in part, to luck. One of the few words that rattled her on Thursday was “nepeta,” a unique herb that The New York Times described in 2014 as “intoxicating to cats but relaxing to humans.”

“I got it this time,” Zaila said in a televised interview after her win.

Zaila, who just finished eighth grade in her hometown, Harvey, La., showed a prowess for spelling at 10, when her father, who had been watching finals of the Scripps National Spelling Bee on ESPN, asked her how to spell the winning word: marocain.

Zaila spelled it perfectly. Then he asked her to spell the winning words going back to 1999. She spelled nearly all of them correctly and was able to tell him the books where she had seen them.

“He was a bit surprised by that,” Zaila said in an interview before the finals.

But she did not start spelling competitively until two years ago, when she asked her parents if she could compete in the regional spelling bee.

She got as far as the third round of the 2019 national tournament when she was tripped up by the word “vagaries.”

Zaila, whose father changed her surname from Heard to Avant-garde in homage to the jazz great John Coltrane, has for years found other avenues of success. A gifted basketball player, she set three Guinness world records for the most basketballs dribbled simultaneously (six basketballs for 30 seconds); the most basketballs bounces (307 bounces in 30 seconds); and the most bounce juggles in one minute (255 using four basketballs). With her victory on Thursday, she also became the first winner from Louisiana.

In 2018, she appeared in a Steph Curry commercial that showcased her skills. She also learned how to speed read and figured out that she could divide five-digit numbers by two-digit numbers in her head, a skill she said she had a hard time explaining.

“It’s like asking a millipede how they walk with all those legs,” said Zaila, who has three younger brothers.

Winning the bee became her next goal.

When the pandemic forced the cancellation of the Scripps bee in 2020, Zaila signed up for a national online competition held by Hexco Academic, a Texas-based organization that coaches spellers, and Kaplan Test Prep.

She won, beating out 88 other students, and received the top prize of $10,000. Her winning word was “Qashqai.” (A migratory Turkic-speaking people of the Zagros mountains east of the Bakhtiari.)

“I really like that word,” Zaila said. After her victory, her father jumped onstage to hug her.