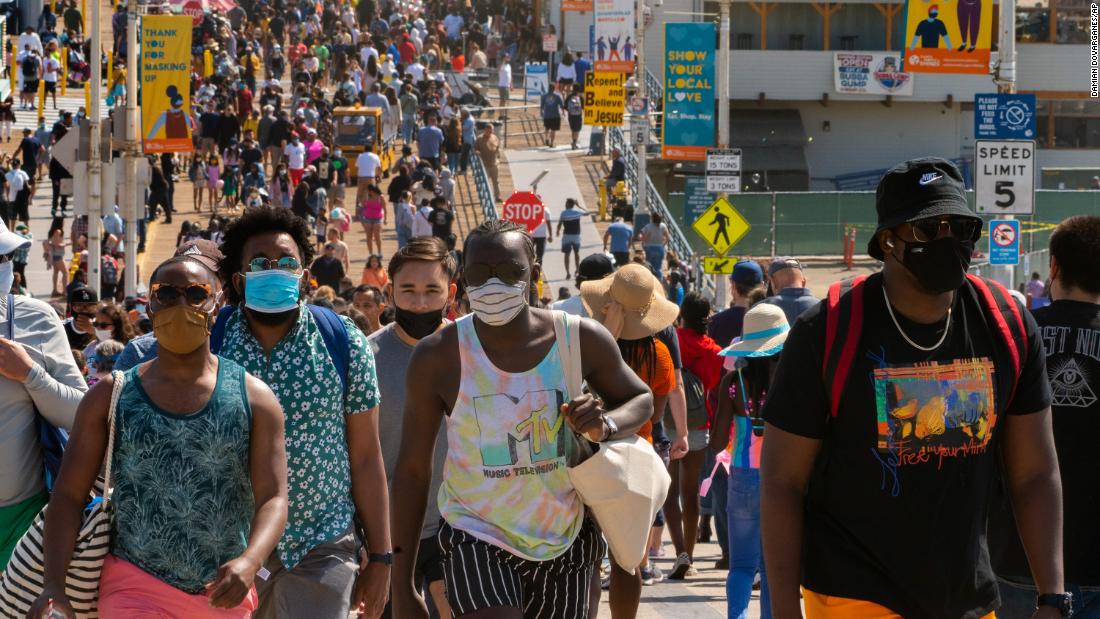 “Whether it’s someone they know that has Covid or someone that they know that died, or friends who talked about it or just seeing it in the media, all of those things caused everyone some sort of trauma,” Dr. Jeff Gardere told CNN’s Pamela Brown. “Covid has really changed our lives.”

At the start of this holiday weekend, nearly 2 million people traveled through airports, a record for the pandemic, according to the TSA. And with 50% of Americans having received at least one dose of the vaccine, summer revelers fled to beaches like Miami Beach and Santa Monica this weekend.

“It’s a whole year of staying indoors, and now you come outside everybody is out riding their bikes, jogging, exercising, partying,” KerryAnn McGregor, a Miami Beach visitor, told CNN. “It’s OK now.”

But after going from the disruption of isolation and masking to the overwhelming effort of mass vaccination, making the shift to a more normal life might not be so simple for everyone, Gardere said.

“We had gotten ourselves into a very safe bubble … But now it kind of feels like the rug was pulled out from under our feet — doesn’t it — for people who are quite fearful of returning back to the workplace, back to school,” he said. “People are having anxiety.”

Rather than avoid the anxiety, Gardere said it is best to confront it with healthy coping mechanisms like meditation, breathing, peer support and counseling.

“Each day you confront that anxiety, the better off you will be,” he said.

Different risks for vaccinated and unvaccinated people over the holiday

The Memorial Day beach gatherings this year are not as worrisome to health experts as they were last year.

The high number of vaccinations has meant a decrease in cases in protected people. But for those who have not been inoculated, the risk of large gatherings remains high because “the virus has fewer places to go,” Wen said.

“We do have more transmissible variants, and unfortunately those individuals who don’t have immunity are not protected from these variants that can wreak a lot of havoc,” Wen explained.

Gelber said one of the problems is that “we’re one of the few places open, but we’re also a very attractive destination. So simply, too many people are coming.”

“The virus is still here,” he reminded everyone when speaking with CNN’s Kate Bolduan on Friday. “The volume of people that have been coming here is very unprecedented, and some who are coming are looking to sort of act out.”

The mayor said there will be “an enormous saturation of police officers” on patrol over the long weekend.

We need to know where this virus came from, expert says

Amid the relief of high vaccination rates and declining infections, experts are turning their attention to identifying the origin of the virus.

Experts previously said that the virus was most likely transmitted from an animal. But after a US intelligence report found that several researchers at China’s Wuhan Institute of Virology fell ill in November 2019, former commissioner of the US Food and Drug Administration Dr. Scott Gottlieb said last week that there is “growing circumstantial evidence” that Covid-19 may have come from a lab.

Chinese Foreign Ministry spokesperson Zhao Lijian rejected the report at the time and accused the US of “hyping up the lab leak theory.”

“Through field visits and in-depth visits in China, the experts unanimously agreed that the allegation of lab leaking is extremely unlikely,” Zhao said.

The Chinese government has not been transparent on this issue, Wen has said, but it is important the global community get down to the bottom of it.

Gottlieb said on CBS’s Face the Nation Sunday that the scientific community may never know the origin for sure.

“Unless we get very lucky and we either find the intermediate host, we find a colony of civic cats or pangolins where this is epidemic and it could have first spilled over into humans, or we have a whistleblower in China or regime change — which we’re not going to have — I don’t know that we’re going to find out with certainty that this came out of a lab,” said Gottlieb.

“I think we’re going to ultimately come up with an assessment and a probability on whether this came out of a lab versus a zoonotic source,” he said.

Hotez explained that the Covid-19 pandemic is the third major coronavirus epidemic of the century, following the original SARS epidemic and MERS epidemic.

“Mother Nature’s telling us what’s going to happen,” Hotez said. “There’s going to be Covid-26 and Covid-32, unless we fully understand the origins of Covid-19, and this is absolutely critical and what’s needed.”

CNN’s Aya Elamroussi and Naomi Thomas contributed to this report.