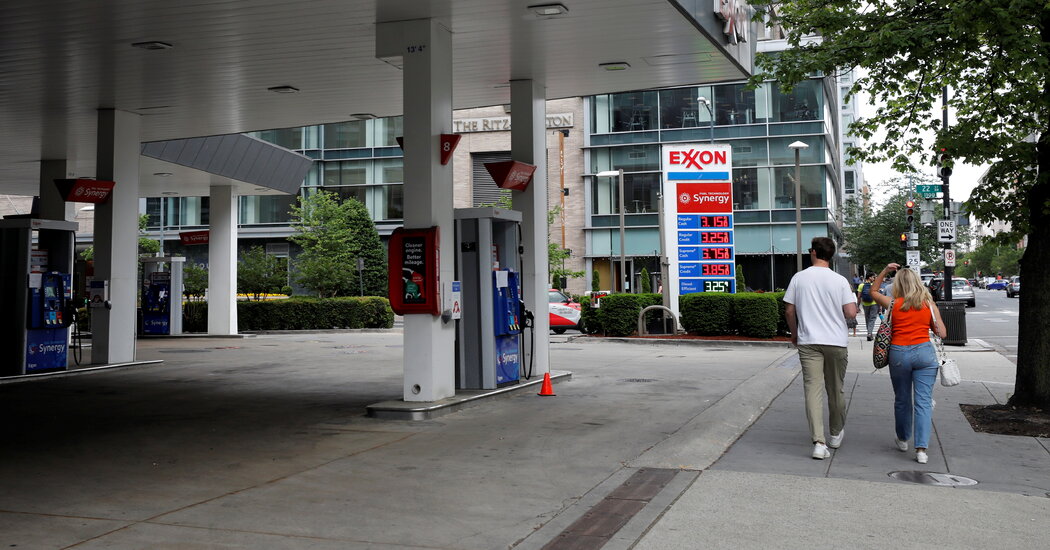 Exxon Mobil was dealt a stunning loss at its annual shareholder meeting on Wednesday from an unlikely opponent: a small new activist investor focused on climate change, Engine No. 1. The hedge fund won at least two seats on the oil giant’s 12-member board. It may yet claim a third nominee when the counting is over.

For corporate America, the DealBook newsletter reports, the upset victory for Engine No. 1 and its allies is a clear sign that company boards and leaders need to pay attention to environmental, social and governance issues (known as E.S.G.) — or suffer rebukes.

Exxon was the first activist campaign for Engine No. 1, which was founded last year by an energy and tech investor, Chris James. Its head of active engagement is Charlie Penner, a veteran hedge fund executive who helped lead campaigns against companies like Apple while at Jana Partners.

Engine No. 1 began agitating against the oil giant in December, calling on the company to diversify away from fossil fuels and reduce its carbon emissions. But it began work on the campaign last March, courting large investors like public pension funds that held far larger stakes in Exxon, and thus had more sway. That’s how it parlayed a stake of just 0.02 percent into getting its preferred nominees on the company’s board.

The fund’s campaign was a bet on a confluence of events, according to two people with knowledge of the matter, including longstanding investor dissatisfaction with Exxon’s corporate governance and a growing appreciation on Wall Street for E.S.G.

That position appeared to be supported after the Exxon meeting. In a note explaining why it backed some of Engine No. 1’s board candidates, BlackRock — which owns nearly 7 percent of Exxon — said the company’s directors “need to further assess the company’s strategy and board expertise against the possibility that demand for fossil fuels may decline rapidly in the coming decades.”

Exxon had largely played down Engine No. 1’s concerns, and pressured the firm to drop its challenge after a much bigger hedge fund, D.E. Shaw, called off a campaign. But Engine No. 1 persisted, and also benefited from timing: It began its campaign while oil prices were still depressed by the pandemic. Had oil not rebounded in recent months, Engine No. 1 executives believed, all four of its proposed directors might have been elected, the people with knowledge of the matter said.

Exxon’s loss was just one sign on Wednesday that Big Oil is facing a climate reckoning. A Dutch court ruled that Royal Dutch Shell must speed up its efforts to cut its carbon emissions. And Chevron shareholders backed a proposal to compel the company to help customers reduce their own emissions.

Big Oil was dealt a stunning defeat on Wednesday when shareholders of Exxon Mobil elected at least two board candidates nominated by activist investors who pledged to steer the company toward cleaner energy and away from oil and gas.

The success of the campaign, led by a tiny hedge fund against the nation’s largest oil company, could force the energy industry to confront climate change and embolden Wall Street investment firms that are prioritizing the issue, The New York Times’s Clifford Krauss and Peter Eavis report.

Engine No. 1, the hedge fund leading the campaign, was seeking to defeat four of the company’s 12 director candidates. Its victory is a sharp rebuke to Darren W. Woods, Exxon’s chairman and chief executive, and is the culmination of years of efforts by activists to force the oil giant to change its environmental policies and approach. Engine No. 1 and its allies had argued that Exxon’s stance on climate change and the oil and gas business was not just bad for the planet but that it would hurt the company’s profits in the future as governments required businesses to reduce and eventually eliminate emissions of greenhouse gases.

Gregory Goff, former chief executive of Andeavor, a refiner, and Kaisa Hietala, an environmental scientist and former executive at Neste, a Finnish energy company that produces biofuels, were the two nominees declared winners. The company said the final results would not be publicly available Wednesday, and an independent inspector will determine the timing of an announcement.

“This isn’t really about ideology, it’s about economics,” Chris James, founder of Engine No. 1, said. “And economics is what has driven the adoption of some of the alternative fuel sources versus fossil fuels. We want there to be an acceptance of change.”

“We welcome the new directors,” said Mr. Woods, the Exxon head. “While there is still more to do, we are proud of the progress we have made to reduce emissions and clear plans for further reductions.”

“This signals a new era for the role of corporations in climate change and a new era for corporate governance,” said Erik Gordon, a University of Michigan business professor.

The vote reveals the growing power of giant Wall Street firms that manage the 401(k)s and other investments of individuals and businesses to press chief executives to pursue environmental and social goals. Some of these firms are run by executives who say they see climate change as a major threat to the economy and the planet. The loss of at least two seats on its board will almost surely energize activists to pressure Exxon, other oil companies and businesses in various industries that they believe are not doing enough to address climate change.

U.S. stock futures fell slightly on Thursday before fresh data is released later in the day on state unemployment benefit claims and durable goods sales. The jobless claims are expected to fall for a fourth week to the lowest level since before the pandemic.

Investors will be watching jobs data closely in the United States, as a measure of how the economic recovery is progressing and how much monetary stimulus the economy still needs.

The Federal Reserve has a dual mandate to keep inflation stable and reach full unemployment, and recent data has shown a sharp rise in prices. Policymakers say the increase is likely to be temporary, but they have been “talking about talking” about when the central bank will be ready to slow down its bond-buying program. The monetary stimulus has helped keep stock prices high.

That said, the strength of the labor market is being vigorously debated. In April, job gains slowed sharply and some employers have complained about struggling to fill vacancies even as millions of people remain unemployed.

Randal K. Quarles, the Federal Reserve’s vice chair for supervision, said on Wednesday that he thought the central bank should start discussing how and when to slow its big bond purchases.

When Apple and Google collaborated last year on a smartphone-based system to track the spread of the coronavirus, the news was seen as a game changer. The software uses Bluetooth signals to detect app users who come into close contact. If a user later tests positive, the person can anonymously notify other app users whom the person may have crossed paths with in restaurants, on trains or elsewhere.

Soon countries around the world and some two dozen American states introduced virus apps based on the Apple-Google software. To date, the apps have been downloaded more than 90 million times, according to an analysis by Sensor Tower, an app research firm. Public health officials say the apps have provided modest but important benefits.

But Natasha Singer of The New York Times reports that some researchers say the two companies’ product and policy choices have limited the system’s usefulness, raising questions about the power of Big Tech to set global standards for public health tools.

Computer scientists have reported accuracy problems with the Bluetooth technology. Some of the app users have complained of failed notifications, and there has been little rigorous research on whether the apps’ potential to accurately alert people of virus exposures outweighs potential drawbacks — like falsely warning unexposed people or failing to detect users exposed to the virus.

“It is still an open question whether or not these apps are assisting in real contact tracing, are simply a distraction, or whether they might even cause problems,” Stephen Farrell and Doug Leith, computer science researchers at Trinity College in Dublin, wrote in a report in April on Ireland’s virus alert app.

Isabella Casillas Guzman, President Biden’s choice to run the Small Business Administration, inherited a portfolio of nearly $1 trillion in emergency aid and an agency plagued by controversy when she took over in March. She has been sprinting from crisis to crisis ever since.

Some new programs have been mired in delays and glitches, while the S.B.A.’s best-known pandemic relief effort, the Paycheck Protection Program, nearly ran out of money for its loans this month, confusing lenders and stranding millions of borrowers. Angry business owners have deluged the agency with criticism and complaints.

Now, it’s Ms. Guzman’s job to turn the ship around. “It’s the largest S.B.A. portfolio we’ve ever had, and clearly there’s going to need to be some changes in how we do business,” she said in an interview with The New York Times’s Stacy Cowley.

“The S.B.A. needs to be as entrepreneurial as the small businesses we serve,”
she added. “What I really, truly mean by that is that a more customer-first approach.”

The S.B.A. is by far the smallest cabinet-level agency, with an annual operating budget that is typically less than half of what the Defense Department spends in a day. It was long viewed within the government as a sleepy backwater.

But when the pandemic sent unemployment claims soaring, Congress responded with a plan to give businesses money to keep their workers employed. Just seven days after President Donald J. Trump signed the $2.2 trillion CARES Act in late March 2020, the Small Business Administration began accepting applications for the Paycheck Protection Program.

Despite lots of speed bumps — including confusing, often-revised loan terms and several technical meltdowns — the program enjoyed some success. Millions of business owners credit it with helping them survive the pandemic and keep more workers employed.

In recent decades, the area in and around Pennsylvania’s Lehigh Valley has evolved from its agricultural and manufacturing roots to also become a health care and higher education hub.

Huge warehouses are sprouting up like mushrooms along local highways, on country roads and in farm fields. The boom is being driven, in large part, by the astonishing growth of Amazon and other e-commerce retailers and the area’s proximity to New York, the nation’s largest concentration of online shoppers, roughly 80 miles away.

But the warehouses are being built at such a dizzying pace that many residents worry the area’s landscape, quality of life and long-term economic well-being are at risk.

E-commerce is fueling job growth, but the work is physically taxing, does not pay as well as manufacturing and could eventually be phased out by automation. Yet the warehouses are leaving a permanent mark. There are proposals to widen local roads to accommodate the thousands of additional trucks ferrying goods from the hulking structures.

Developers are confident in the industry’s growth, however, particularly after the pandemic. Big warehouse companies like Prologis and Duke Realty are investing billions in local properties. Many of the warehouses are being built before tenants have signed up, making some wonder whether there is a bubble and if some of these giant buildings will ever be filled.

“People are calling it warehouse fatigue,” said Dr. Christopher R. Amato, a member of the regional planning commission. “It feels like we are just being inundated.”

But some, like David Jaindl, a third-generation farmer, said the concerns in the area about warehouses were unwarranted.

“They are certainly good for our area,” said Mr. Jaindl, who is developing land for several new warehouses. “They add a nice tax base and good employment.”

Manufacturing jobs in the Lehigh Valley pay, on average, $71,400 a year, compared with $46,700 working in a warehouse or driving a truck. The region is still home to large manufacturing plants that produce Crayola crayons and marshmallow Peeps candies.