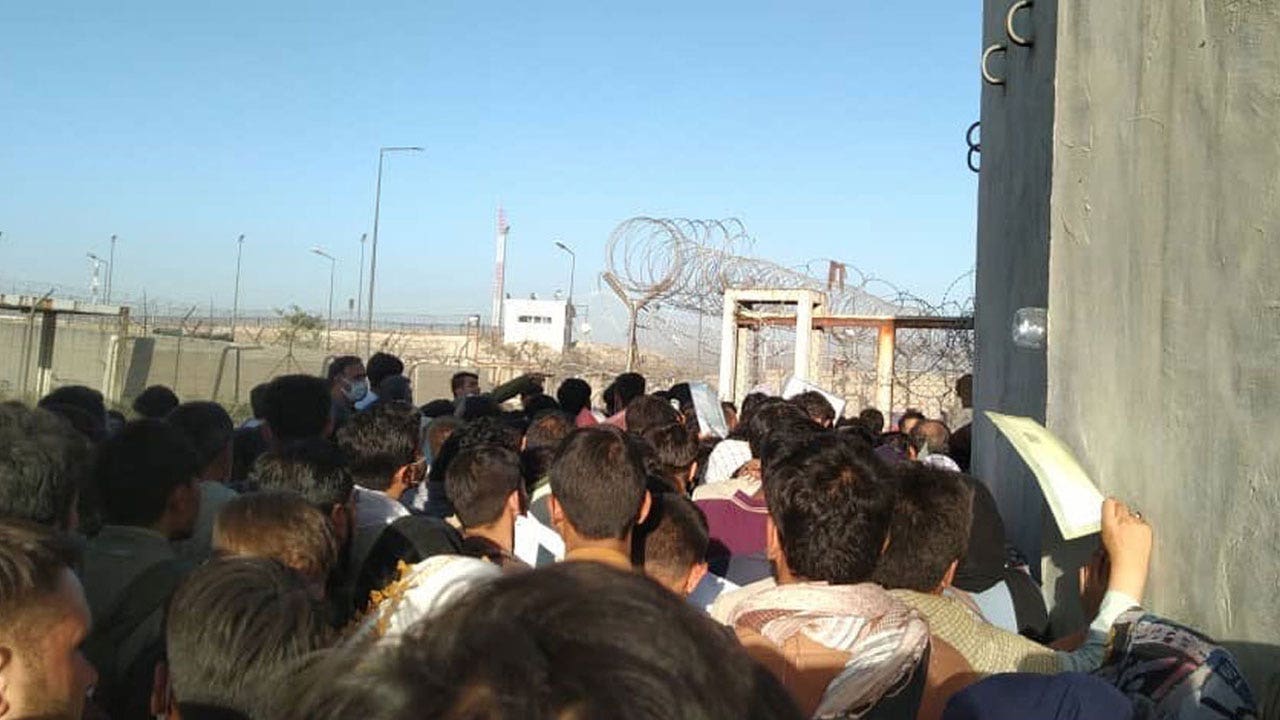 Good morning and welcome to Fox News First. Here’s what you need to know as you start your day …

“Because of security threats outside the gates of Kabul airport, we are advising U.S. citizens to avoid traveling to the airport and to avoid airport gates at this time unless you receive individual instructions from a U.S. government representative to do so,” the statement from the embassy read.

“U.S. citizens who are at the Abbey Gate, East Gate, or North Gate now should leave immediately,” the embassy added.

The warning underscored the chaos and uncertainty on the ground outside the Kabul airport, where hundreds of Americans still have been attempting to get out of the country. U.S. troops have been stationed at the airport, though a heavy Taliban presence has been reported outside the grounds, with persistent concerns about potential terrorism.

President Biden has aimed to stick to an Aug. 31 deadline to withdraw U.S. troops from the country, though the White House has said contingency plans were being discussed, amid criticism from lawmakers in both parties that it would be too unsafe not to extend the deadline. Concerns have also been raised about Special Immigrant Visa holders reportedly being blocked by the Taliban from accessing the airport.

The Biden administration has said it didn’t trust the Taliban, but repeatedly has called on the Islamic militant group to allow people to safely access the airport and to refrain from violence. CLICK HERE FOR MORE ON OUR TOP STORY.

Abbott’s executive order bans a requirement for the shot even if it is fully approved by the Food and Drug Administration, as the Pfizer vaccine was this week, according to the Texas Tribune.

The governor’s previous order banned vaccine mandates only for those products under emergency approval.

Parker’s injunction will likely be appealed to the court of appeals and the Texas Supreme Court.

“It’s a victory for humans who live in Dallas County against the virus,” Jenkins said of the ruling, according to the Dallas Morning News. “I hope we’ll all take off our red hat and our blue hat and put on our human hat and listen to doctors.” CLICK HERE FOR MORE.

In other developments:
– Arkansas runs out of intensive care beds for COVID patients: ‘critical’
– Woman carried by cops while seated from Texas school board meeting for refusing to wear mask, district says
– Tucker Carlson: Leaders need to explain their COVID mandates, not just tell us to obey
– Harris, Newsom require rally goers get vaccine or negative test despite staying in cars

Florida tourist shot dead while protecting his baby at restaurant; suspect arrested
A young father died after a gunman walked into a Miami Beach restaurant and pointed a gun at the father’s 1-year-old son, police said.

Dustin Wakefield, 21, had been on vacation from Castle Rock, Colorado, with his family. They were eating at the La Cerveceria restaurant around 6:30 p.m. Wednesday when the suspect walked through the door.

“This guy came in with a gun waving it, saying it’s time to die. He pointed the gun at his son and Dustin said, ‘He’s only a boy,'” Mike Wakefield, the victim’s uncle, told the Miami Herald. “Dustin stood up between the gunman and the baby and he shot him. He shot him multiple times on the ground.”

In a short video taken immediately after the shooting and obtained by WSVN-TV, the gunman – later identified as Tamarius Blair Davis Jr. of Norcross, Georgia – can be seen dancing while people are heard screaming. The gunman then walks up some steps, the weapon in his hand.

Davis fled the restaurant, police said, and was captured in a nearby alley. Cellphone video obtained by the Herald shows Davis lying spread-eagle on his back and smiling as three officers approach with their guns pointed toward him, yelling commands, warning him that if he touches his gun he will be shot. CLICK HERE FOR MORE.

TODAY’S MUST-READS:
– Man gets 6 years in prison in Michigan governor kidnap plot
– Meghan McCain shades Kamala Harris over John McCain memorial visit: ‘If you want to honor my dads legacy … ‘
– Kudlow: The US has caved into the Taliban terrorists
– Florida kite surfer, 61, dead after slamming into wall of beachside home
– California fire advances toward Lake Tahoe after destroying hundreds of homes

The president “hasn’t explained those things because they’re all inexplicable,” Cotton said on “Hannity.”

“I think the news tonight gives us an example of why it’s so ill-advised for President Biden to be rushing to this Aug. 31 deadline,” Cotton said. “All Americans around the airport have been told to leave immediately because of the terrorist threat.

“Let’s hope there is not a terrorist attack for the safety of our troops,” he added. “But the very fact that Joe Biden is sticking stubbornly to this Aug. 31 deadline indicates that all it takes is for the Taliban or ISIS or al Qaeda to continue with these kinds of threats to prevent hundreds, if not thousands, of Americans from being left behind enemy lines come Tuesday.”

Not signed up yet for Fox News First? Click here to find out what you’re missing.

Fox News First was compiled by Fox News’ Jack Durschlag. Thank you for making us your first choice in the morning! We’ll see you in your inbox first thing Friday.